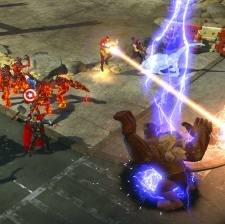 The acquisition means Trion will take ownership of all licenses, trademarks, patents, domains and past games belonging to Gazillion. The Marvel Heroes developer shut down last November, after Disney terminated a partnership to have the studio develop Marvel games. Without the flagship title, Gazillion almost immediately closed its doors.

Naturally, Trion won’t be able to continue development on Marvel Heroes, and shows no interest right now in acquiring the superhero license. But the defunct studio’s assets will be used as a part of Trion’s work with third-party developers, particularly in developing MMO titles.

In particular, Trion hopes that it’s server technology will be improved with the acquisition, allowing them to reduce development times for partners. The publisher is keen on selling itself to developers who want to mitigate crunch as often as possible.

"We want ourselves and other developers to be able to make games and succeed and have sustainable life cycles," said Trion Worlds CEO Scott Hartsman. "Crunch and burn and lay off is unhealthy. We have tried to do things about it and we want to be a good member of the gaming ecology. We keep trying to do things to help other developers."

Trion Worlds is perhaps best known for the 2011 MMORPG Rift. The publisher currently plans to release a remaster of it's 2013 TV tie-in Defiance later this year.