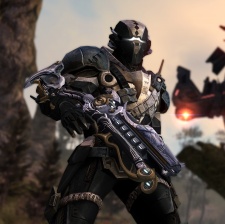 Trion Worlds has revealed that it is remastering its 2013 game Defiance with Defiance 2050. This will be available on PC, PlayStation 4 and Xbox One this summer.

This remake updates the sci-fi MMO to fit with the current consumer expectations. The framerates, textures and resolutions have all been upgraded and improved for the game to allow for larger scaled battles, and the ability for more players to join in on the action.

“Defiance 2050 has been created with the original game’s community in mind,” said Defiance 2050 producer Matt Pettit.

“The team has been listening to feedback and taking some helpful cues from fans to really create the Defiance experience that people have wanted for a long time. Defiance 2050 marks a shift for the game that goes beyond the change from the year 2046 to 2050, and we are absolutely thrilled to hear what people think of it.”

The game will be free-to-play from the start, and Defiance 2050 will also have a closed beta period prior to launch for player feedback. Rewards will also be available to those that have played the original game.

The original game launched in 2013 alongside a TV show by the same name on the SyFy channel, which ran for three seasons until 2015. The title started out as a premium subscription-based model but eventually moved to the free-to-play model that the remaster has also adopted.

Trion Worlds has changed greatly over the past few years, and now has multiple games and partnerships, which we spoke to CEO Scott Hartsman about last year. Defiance 2050 will be available on PlayStation 4, Xbox One, and PC summer 2018.