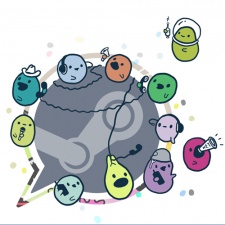 Valve has given its Steam Chat functionality a new coat of paint with a number of features that seem reminiscent of another chat services.

In a blog post, the firm announced that these new Steam Chat features were now in beta.

This update introduces group chats to Steam Chat, with users able to easily add their friends with a drag-and-drop feature. These forums feature text and voice chats as well as permissions for specific users.

Steam's voice chat has been redesigned to be more seamless.

You can check out a picture of the interface below - it's pretty clear where Valve drew its inspiration for this new style of app.

It's clear that Discord is onto something. The service has 130m users, meaning that its userbase tripled during 2017. It's essentially the defacto chat app for communicating and playing games on PC.

Asked what was driving this growth, CEO Jason Citron said that this popularity had been driven by Discord actually solving a problem for gamers and word of mouth of this fact spreading fast.

The changes to Steam's chat and social functionality were rumoured at the start of June and represent the latest in a series of changes to Valve's storefront.

The firm has recently allowed developers and publishers to create their own homepages on Steam, as well as integrating streaming functionality to the platform.

Wishlists also got a lick of fresh paint ahead of the Steam Lunar Sale.

Then there's the small matter of Valve teaming up with Perfect World to launch Steam China.

Could Discord dethrone Steam as the go-to PC games marketplace?