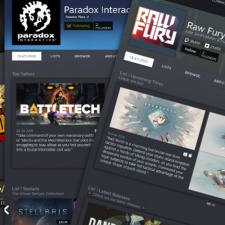 Developers and publishers can now create customised homepages on Steam.

That's according to a post on the Steamworks website - as spotted by SteamDB -which says that companies will be able to display their games and provide information about what they are up to.

These pages are customisable, with firms able to choose to feature games, show lists for specific franchises or genres, have custom URLs as well as integrate Google Analytics functionality. Additionally, they are able to post news announcements.

Consumers are also able to follow companies and be notified about their upcoming releases.

This feature set is currently in closed beta, with an open beta kicking off on June 18th. That's just ahead off the Steam Summer sale. During the Lunar New Year Sale, Valve changed up how Wishlists worked, so rolling out new functionality like this around sales events appears to be something of a strategy for the PC giant.

Publishers who appear to be using this already include 2K, Paradox and Raw Fury.

This is just one change coming to Steam. The PC giant is reportedly overhauling its social functionality, with a Discord-inspired voice and text chat system being implemented in the near future.

Homepages are just one more way that Valve is trying to give creators more means of promoting their wares on Steam. Earlier in the year, it appeared that the company allowed developers and publishers to stream their game directly from the store page.