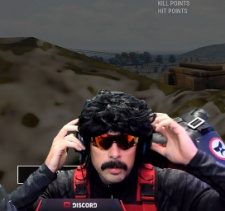 Popular Twitch streamers Dr Disrespect and Shroud have had their hissy fits endorsed with a pair of custom PUBG weapon skins.

Guy 'Dr Disrespect' Beahm offered PUBG developer Bluehole an ultimatum of sorts after threatening to stop playing the game on Twitch. He demanded that he recieve a custom skin inside PUBG or he was done with the title 'for good'.

Beahm has become increasingly frustrated with PUBG, often commenting on issues with servers, bugs and in-game glitches. His rage peaked a couple of weeks ago; after being killed in a round of the battle royale title he proceeded to smash up his chair and call PUBG a "garbage ass game".

The full story is over on InfluencerUpdate.biz