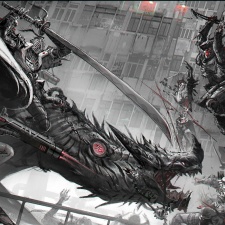 Boss Key revealed it would be ceasing operations earlier this week, following Radical Heights’ failure to keep the lights on. The studio released two games over its brief lifespan, but last night Bleszinski shared pre-production art from game concepts Boss Key had been floating.

The most fleshed out concept was a game codenamed DragonFlies. Players, decked out in stylised samurai getup, would ride off from giant airships on customised dragons to take on the undead. You would be able to hatch and train new beasts to specialise in different roles.

“Basically you were ninja/samurai in airships riding dragons fighting zombies with friends in a PVE "feudalpunk" setting on floating islands,” Bleszinski describes it. “You used melee and guns and could outfit your beasts for combat. Basically do for dragon riding what Halo did for vehicles.

Boss Key pitched DragonFlies to publishers including MS, Sony, EA, 2K and Activision to no success. A $40 million asking budget might have been a steep ask, particularly for a struggling studio like Boss Keys that had yet to find an audience.

Another teased title, VR robot battler Rover - later Dogwalkers - was inspired by WW2 tank crews. Teams would duke it out in DOGs (Destructive Ordinance on the Ground) over 5v5v5v5v5 multiplayer matches. A final concept was pitched as a VR successor to Toobin. Donuts would be Mario Kart on water with animals, according to Bleszinski.

WIth Boss Keys closing down, it’s unlikely we’ll ever see more on these titles. Last week made it clear the studio was banking on Radical Heights doing well off the battle royale craze. While feudalpunk dogfights and giant dog feuds might sound exciting on paper, it’s hard to tell if the studio could have made a success out of them.