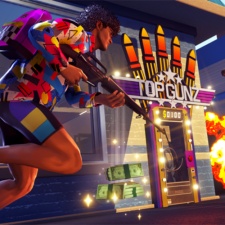 Just days after announcing it was no longer working on failed arena shooter LawBreakers,North Carolina-based developer Boss Key has revealed its next project.

Radical Heights is a free-to-play 80s-tinged battle royale game that features BMXs and neon art style. Cynics might tell you this is the studio chasing the Fortnite dollar and they might not be wrong.

The game launches into Steam Early Access - sorry 'X-TREME Early Access - today, with Boss Key planning on remaining in the alpha programme for about a year, according to the store page.

“Radical Heights is a five month passion project for the studio as we’re creating and publishing the game entirely by ourselves,” creative director Zach Lowery said.

“We’re huge fans of Battle Royale games along with the bright, inviting irreverence of the 80’s aesthetic. Because of that, we want to put our own spin on the genre and create a futuristic 80’s world that takes place in 2023 during an over-the-top game show where contestants battle it out for fame and prizes."

This game follows a troubling year for Boss Key which saw the studio's debut game LawBreakers absolutely flop. Though the game itself was met with positive reviews, it failed to find an audience. When the developer announced it was going to stop working on it last week, it had had an average of 25 players in the last 30 days on PC - not good.

Publisher Nexon reckons that Playerunknown's Battlegrounds might have had something to do with LawBreakers not finding its audience.

Radical Heights looks like a risky, last ditch effort for the studio. Free-to-play is a tricky model to get right - something Boss Key knows all too well from its attempts to implement it in LawBreakers. It also relies on having a large, engaged audience that is - most importantly - willing to shell out for in-game items.