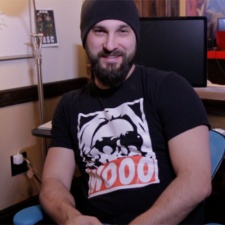 At the start of April, US games firm Boss Key called time on its debut, online multiplayer title LawBreakers. That game had simply failed to take off, not gaining enough players at the start and never really recovering, so it simply became not viable for the studio.

So imagine our surprise when just four days later the developer announced its new project, 80s styled free-to-play battle royale title Radical Heights. That title has just launched into Early Access and thus far, the reception has not been overly positive. We caught up with creative director Zach Lowery to find out more.

What was the lift pitch behind Radical Heights?
A tongue in cheek, 80's fueled battle royale game show filled with wacky and unpredictable experiences. That might be a little short, but you didn't tell me how many floors we were going up in the lift.

How long has the game been in development?
Radical Heights has been in development since the last week or so of October 2017. With holidays, snow days and so on, roughly five months. I think it's an incredible testament to the talent we have at our studio.

Boss Key tried free-to-play before with LawBreakers and didn't like working with the model from what I've heard. What's changed this time around?
LawBreakers shipped as a paid title.

Sure, but it was in development as a free-to-play game to start with before you pivoted business models. Are you approaching free-to-play a bit differently this time around?
For Radical Heights, our approach to free-to-play is simple, make a great game that is sticky, and players want to keep playing, and never stop someone from buying that they want to buy. If the game is good, and compelling, the audience will stay, and if someone is generous enough to open their wallet because they want to buy a silly jacket that helps them express their avatar in a way that they like, always allow them to do so.

Often times as developers we say: 'Gameplay is King', and while this is true, if a game isn't fun no one will play it. What we neglected is that 'Accessibility is the Kingdom'. If your game isn't accessible, players will be thrown off and never grasp the fun that exists with the gameplay.

LawBreakers - great a game as it was - failed to meet expectations and secure an audience. What have you taken away from that experience and applied to Radical Heights?
Often times as developers we say: 'Gameplay is King', and while this is true, if a game isn't fun no one will play it. What we neglected is that 'Accessibility is the Kingdom'. If your game isn't accessible, players will be thrown off and never grasp the fun that exists with the gameplay.

On Radical Heights we have applied a lot of focus on making sure that mechanics are simplified and understandable. You want to open that giant mystery door, just stand in front of it -- no complex interactions. This is something we will continue to focus on as we move forward through Early Access, and also something we will be listening heavily to our community's feedback on.

Right now, the battle royale genre is becoming rather busy with lots of developers getting into the market. How are you going to prove that you're 'for real' and not just another company looking to cash in on the trend?
We don't take ourselves too serious, and we are focusing on making sure the 99 per cent of players who lose in a given round have fun and are enticed with other reasons besides 'just winning' to drop back in an play another round. We wanted to focus on other player types, and give them reasons to drop in and try it out.

Most battle royale games are focused on shooter player types, and while we are very much a hardcore shooter, we are also playing heavily to customizer, and adventuring player types. A player who may not be the best: 'Put my reticle on you and out click you' player, can drop into a round of Radical Heights and explore the world looking for cosmetic items to find and unlock.

We've essentially laid the groundwork for an 80s fuel scavenger hunt through our world, all while trying to survive the competition...didn't make it to No.1, but you found that sweet pair of parachute pants you've been wanting, sounds like a win to me. We have some really fun ideas on how to expand this in the future, stay tuned.

Why launch into Early Access?
When we first started pitching ideas for a new project, the team wanted to focus on creating an Early Access game, something we could build the core gameplay for quickly, and let our audience start enjoying it as soon as possible, instead of holding onto something for two-to-three years and then going 'Tada!'.

For multiplayer games, Early Access is becoming more and more of the norm and teams want to build games with their community, making pivots and doubling down on features that players embrace, at a stage where it doesn't take months to change it, or you are in a corner and can't change things at all. For a small team like ours, our biggest strengths are speed and agility, so building an early access type game is the perfect development for us to work within.

The lack of female playable characters seems like something of an oversight. How did this happen and how quickly do you see women characters being released into the game?
Radical Heights just launched in Early Access, and we have a lot of features planned for our roadmap to add, and female avatars are one of our biggest priorities. We are working on them, and we want to make sure we do them right. The important thing to note is that all clothing items in the game will work on both males and females. Inclusion and dressing your avatar however you want is something that is very big for us, and we never want you to go "Oh, I can't wear that because I'm 'insert gender'.