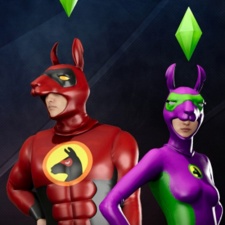 Players that purchase Final Fantasy XV from its launch on March 6th until May 1st on EA's Origin platform can unlock The Sims 4 Llama Suit and Plumbob for use by protagonist Noctis in the single-player campaign, and for gamer's avatars in the multiplayer expansion.

This content isn’t just exclusive to Final Fantasy XV. From March 8th players that own The Sims 4 can download exclusive outfits. A special crowned prince Noctis Lucis Caelum outfit for their avatars will be available to celebrate the launch of Final Fantasy XV

The Sim skins aren’t the only pre-order skins that Square Enix has to offer. The company previously announced that Half Life’s protagonist Half-Life Gordon Freeman will be available in the game from May 1st as a skin for consumers buying via Valve's Steam platform.

As well as unlockable skins, multiple other bonuses have been announced for the PC port. There is an extended map available with Insomnia City Ruins, containing new side quests and enemies such as Cerberus and Omega. A new boat allows gamers to explore the world of Eos between Cape Caem and Altissia, and there are new accessories, weapons and item sets available to download.

The game will also have a new first person camera to experience the game from Noctis’ perspective. The game supports Native 4K and 8K resolutions with HDR10 and DOLBY ATMOS, along with ongoing mod support.

Gamers who pre-order from Origin will also receive bonus of the FFXV Decal Selection; this selection includes a vast amount of decals for the Regalia car to celebrate Gladiolus, Prompto, and Ignis, as well as the men and women of the Kingsglaive.

Whilst Square's Japanese titles were traditionally console-centric, the firm now has a growing interesting in PC. Not only do these unique skins help to drive sales, it shows yet another partnership driven by Square Enix, with the company having also recently teamed-up with Bandai Namco, Valve and Ubisoft.

Final Fantasy XV launched on console back in November 2016, and will finally be available for PC gamers in March. The game is considered to be a great success that helped reignite the love for the Final Fantasy series, selling five million units worldwide in the first 24 hours alone, and increasing up to seven million by January 2018.