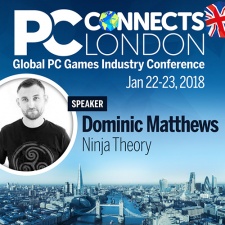 Ahead of his talk at PC Connects London 2018, Ninja Theory marketing chief Dominic Matthews tells us a bit about how Hellblade, one of 2017's most interesting releases, came together

Games don’t have to be either indie or triple-A. They can be both. The dividing lines that once seemed so clearly defined between the two are now thankfully becoming increasingly blurred. Games can be something in-between. Where the creative freedom of independence can be realised with the triple-A production values once reserved exclusively for the blockbusters. Hellblade: Senua’s Sacrifice gives me the confidence to say this as a statement of fact, not just as a posed hypothesis.

Back in 2013, just after completing DmC: Devil May Cry, we at Ninja Theory faced a tricky predicament. The years of the strictly enforced $60 price point at retail were catching up on the industry. The steadfast nature of this standard retail price meant that developers and publishers couldn’t compete on price but instead had to compete on ever-expanding size, scope and feature lists. With developers closing their doors at an alarming rate, this survival of the biggest backdrop meant that mid-sized developers like us had a choice: Either join the triple-A arms race and go big with our developments to compete with the blockbuster behemoths or go home and walk away from our beloved console development altogether. Neither path was appealing. On the one hand, we would go big and risk sacrificing our identity as a studio and be forced to chase the five million-plus audience that triple-A games need to justify their huge development costs. Or go home and walk away from our fans, our track record and console expertise altogether and find a new home for our work.

Something was wrong with this Hobson’s Choice. It felt like ‘punch in the face or kick in the shin. Your choice?’. We wanted to make the games we love to create for the people that wanted to play them. Surely, we could make this work?

We didn’t choose to go big or go home. We chose instead to try to blaze a new trail slap bang through the middle of indie and triple-A, a path we call ‘independent triple-A’. The concept was this: Take a small team and keep the budget low, but never sacrifice on triple-A quality. Sell the game digital-only, where flexible pricing is welcomed and embrace the creative risk-taking that the triple-A market is lacking. A low budget means we keep our breakeven low, which in turn gives us the confidence to make a creatively rich game that isn’t for everyone, but is for our fans.

Independent triple-A as a concept was born and through Hellblade: Senua’s Sacrifice we turned experiment into proven model.

Over a three-year development, we kept our team size to an average of 20 people, found innovate ways to deliver quality at a low cost and market the game with focus and commitment to bang for buck. The question wasn’t ‘do we use performance capture?’, a technology and process that we believe delivers the very best performance in-game, the question was ‘how do we do it within budget?’. The answer: We built an in-house mo-cap studio in our boardroom using Ikea wardrobe poles and office lighting from Amazon. The question wasn’t ‘Can we create a rich and diverse world with just one environment artist?’, the question was ‘how do we do it with the resource we have?’. The answer: A kit part approach to world-building that allowed a small number of high-quality assets to be used in clever ways to build the scale and richness of world the game demanded.

With everything accounted for, we needed to sell under 500,000 units at $29.99 for the project to break even and move into profit. We hit this milestone months ahead of schedule and without the need to discount, whilst receiving a big following of new fans and critical acclaim all at the same time.

Having the independent triple-A model work so well for Hellblade has been fantastic for Ninja Theory, but our hope is that this is an approach that other developers can adopt too. Other developers that find themselves in a similar situation to us and want to make the games they love for the players that want them. We hope that by sharing our experiences in creating Hellblade we can give others the confidence and ammunition to follow their own independent triple-A path, too.

What are the biggest mistakes you can make in a pitch? Communications guru Jon Torrens tells all