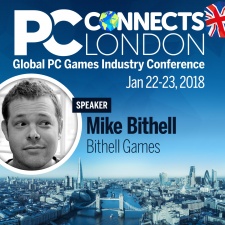 Today, indie superstar Mike Bithell shares some information about his talk about Subsurface Circular, which is part of our Making Of track on the 23rd

Tell us a bit about who you are and what you do?
My name is Mike Bithell and I make games. I came up as a designer, on a range of titles, but found particular success with Thomas Was Alone, a pretentious platformer about friendship and jumping. Since then my company has shipped Volume, EarthShape, and the recent, well-received, Subsurface Circular. I work primarily as a writer, director and producer on these projects.

What are you going to be talking about at PC Connects London 2018?
I want to share a bit about our process making Subsurface Circular, a short game done in 6 months with a mini team. There's lots to share about the process and the way we communicated about the game to our audience. Hopefully it's handy.

What was your favourite PC game from 2017 and why?
I loved a lot last year, but Assassin's Creed Origins stood out to me as a return to form for the franchise. I also spent far too much of the holidays playing Invisible, Inc... which is technically earlier but very, very good.

What do you think are going to be the biggest trends and releases of 2018 for PC?
I think PC will continue to push boundaries and expectations in terms of pricing, mechanics and business models. I'm already seeing other people talking about short games, which excites me, and I think we're out there making a good case for them. Variety will define 2018 on PC.

What are you most excited for in the PC games market right now?
I'm pretty hyped for indie titles I hope to see this year, like Knights and Bikes, and Vampyr. There's also a hell of a lot triple-A fare, like Sea of Thieves and Anthem, which I can't wait to dig into.