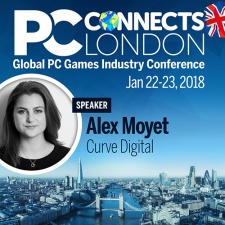 As part of our Digital Discovery track, Curve Digital's Alex Moyet will be sharing her insight into indie games market

Tell us a bit about who you are and what you do.

Oh hi! I’m the Marketing Director at indie publisher Curve Digital and I’m responsible for making sure the awesome games we work on get the love and attention they deserve. We release a variety of brilliant indie games across PC and console and I’m the one nerding out on PowerPoint, devising the strategies and marketing campaigns that will launch these games. Our developers place a huge amount of trust in us to give their games the best chance at release and I take this responsibility very seriously for every campaign element we work on from audience segmentation and branding through to planning events and everything in between. I’m both a marketing and game nerd so it might just be the best job in the world.

What are you going to be talking about at PC Connects London 2018?

I’m going to be giving a quick introduction to how to market your PC indie games, with an emphasis on free or very cost-effective tactics. The PC market has been saturated for some time, for both triple-A and indie titles, with more games coming out year on year, and especially for smaller developers, it can seem an overwhelming task to get discoverability and significant sales without big marketing teams and budgets. Luckily there are some really solid strategies for cutting through the noise I’ve employed over the years, most recently for the release of Bomber Crew which generated over $1m of revenue in the first two weeks, well over forecast.

What was your favourite PC game from 2017 and why?

Obviously, Bomber Crew has a huge place in my heart, but outside of Curve games I really enjoy FPS titles and spent very, very many hours on Overwatch and Destiny 2 in 2017. They’re both just enormous fun, and the control and accuracy you get on PC vs. console is so rewarding, but I still play both on console too because I’m somewhat addicted...

What do you think are going to be the biggest trends and releases of 2018 for PC?

With the huge success of Playerunknown's Battlegrounds I wouldn’t be surprised if we see FPS games integrating more battle royale and survival elements into existing or new multiplayer modes. Release-wise I’m excited to play Sea of Thieves, A Way Out and Far Cry 5 but also hoping we get some great indie releases like we saw in 2017 with the likes of Gorogoa and Cuphead. We’ll be releasing some really amazing titles later in the year including retro racer Racing Apex and adventure game A Knight’s Quest as well as some unannounced gems. It’s going to be a great year for PC.

What are you most excited for in the PC games market right now?

Personally, I’m following PUBG extremely closely not just as a gamer but as a marketeer as well. The numbers they’ve done in 2017 have just been astronomical and notoriously without any significant marketing spend, but how they continue to grow, sustain and nurture that community and evolve the core game itself is going to be fascinating to watch. Hopefully I’ll pick up some tips as well as some chicken dinners!