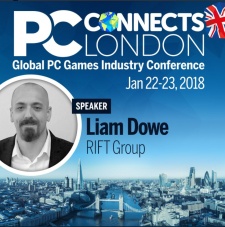 I dipped my toe into the world of finance 2015 when I joined the RIFT group I was asked by the company to start and build a new area of the business know as Video Games Tax Relief or VGTR.

Since starting the small department we have grown and have become successful by working closely with developers to gain back these valuable tax credits. This has been done by being respectful to the industry, having an extensive knowledge of the industry we work in and also a vast knowledge of the tax credits that are unknown by many conventional accountants and tax specialist.

What are you going to be talking about at PC Connects London 2018?

What was your favourite PC game from 2017 and why?

Like many people in the world I’ve been sucked into Playerunknown's Battlegrounds for the last few months. The mix of playing with a group of friends, sneaky tactics and shouty sweary fire fights have got me a little hooked.

I’ve also been play a lot of Blackwake made by Mastfire. It’s a team based FPS set on the seas. You pick a faction of either Navy or Pirates and the aim is to work together to sink the opposing factions ships.

What do you think are going to be the biggest trends and releases of 2018 for PC?

It’s a bit of a cliché answer but I believe if the price point can become realistic VR will play a larger part. With the release of some larger IP’s in VR, price points on headset becoming slightly lower and the necessary hardware upgrades need to run the higher end VR headset I can see this only being a good thing for the industry.

What are you most excited for in the PC games market right now?

I mostly enjoy story-driven single player and MMO’s/co-op titles that I can play with a group of friends. The final season of Telltale's The Walking Dead should be landing in 2018 so very much looking forward to seeing how that ends.

As for MMO and co-op titles, A Way out is looking interesting. I enjoyed Brothers: A Tale of Two Sons and that was made by the same core dev team so hopefully Hazelight can strike gold here. Lastly Dayz Standalone - yeah it’s still a thing - should be in beta in 2018…should be.