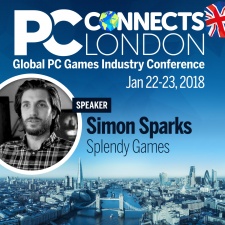 We spoke to the CEO of live action adventure game The Bunker studio Splendy Games Simon Sparks for a glimpse at what his session during The Making Of will be about.

Tell us a bit about who you are and what you do.
I’m Simon Sparks the CEO of Splendy Games, We’re interactive story tellers. My job is to figure out how we keep oxygen in the company and keep punching above our weight!

What was your favourite PC game from 2017 and why?
Hidden Folk. No matter my mood or state of mind, I play this and completely escape to the 10-year-old me who could never get enough of Where's Wally. I can pick it up and put it down whenever I want. Perfect!
Same could be said for Superhot, apart from the 10 years boy bit.

What do you think are going to be the biggest trends and releases of 2018 for PC?
Well, I’m hoping interactive storytelling, using film footage and CG. Anthem is looking like BioWare at its best, so fingers crossed for them. I’m also excited for Last Night.

What are you most excited for in the PC games market right now?
Annoyingly I have very limited time to play games for myself, I normally spend time on the console with kids. I’m still excited about Superhot and the Hidden Folk.

And of course, anything which is pushing the boundaries of storytelling. Late Shift was a really interesting game, it really challenges your perception of what is game by not having any gameplay in it, but its narrative is designed really well and totally works.