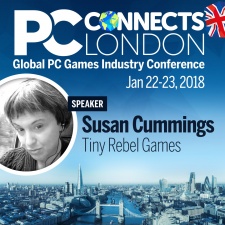 Ahead of PC Connects London on January 22nd and 23rd, we have been speaking to some of the wonderful speakers who are going to be sharing their insight at the show.
Today, Susan Cummings of Wales-based Tiny Rebel Games explains what she will be talking about as part of the show's Making Of track.

Tell us a bit about who you are and what you do
My name is Susan Cummings. Lee Cummings and I run Tiny Rebel Games which we recently relocated from Los Angeles to Newport, Wales. After nearly two decades of collaboration together, we have worked on massive hits like Grand Theft Auto, Bioshock, Bully and Borderlands as well as critically acclaimed indie games like our most recent, Doctor Who: Legacy. Currently, we are primarily focused on the release in 2018 of Doctor Who Infinity for PC and mobile platforms. We're also working on two other games including a game for our family's award-winning Tiny Rebel Brewery, which will arrive in February, and early work on an ambitious new PC simulation game.

What are you going to be talking about at PC Connects London 2018?
I'm going to be talking about distributed development and how it's allowed us to move our business to a relatively nascent area for game development and still do ambitious games with talent both locally and around the world, including the challenges of this and what we've learned so far.

What is your favourite PC game from 2017 and why?
I spend a disproportionate amount of time playing anything and everything Blizzard puts out -- Heroes of the Storm has me hooked again since their big patch, Hearthstone, Overwatch. Been playing some Destiny 2 as well.

What do you think are going to be the biggest trends and releases of 2018 for PC?
Well, Doctor Who Infinity, of course, will be the most amazing release of 2018!

Trend wise I'm sure we'll see more VR and AR, whether or not it makes any money. It'll be interesting to see legally what comes out of the loot crate controversy. And Monster Hunter World looks like it's going to be awesome. I've also always wanted to make a pirate game, used to talk about that at 2K a lot back in my day there, so I'm excited to see not one but two of them coming in 2018.

What are you most excited for in the PC games market right now?
I'm intrigued by how cryptocurrency and gaming will cross over --- things like Cryptokitties, Decentraland --- are the first tentative steps. There's loads to come though, not to mention initial coin offerings to raise money for these games. We're very excited about all of this.