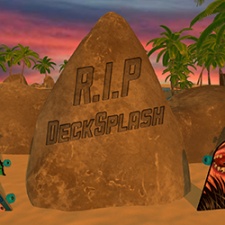 What could have been the latest Bossa Studios title is not to be; the studio has revealed that the making of Decksplash has ceased.

The firm announced this following a Free Week which was designed to test demand for the skateboarding turf-war title. If 100,000 players joined, the project would move to Early Access.

Sadly, this did not happen; Bossa hasn’t said how many people gave the game a try, but it was clearly below expectations.

Regardless of ultimately failing, this was actually a great plan for gauging reaction to a game. Better this than spending a few years making it and it not having an audience.

“So here we are, at the wrap-up time of Decksplash’s Free Week experiment,” Bossa co-founder Henrique Olifiers said.

“It has been quite a nail-biting ride for the team, watching numbers climbing, players having fun, maths, wagers and predictions around the studio done. In the end, we fell short of the 100,000 players we set ourselves as a goal.

“It’s not all tears, though… The Free Week proved what we suspected at the start: Decksplash is a good game, evidenced by its 79-86 Steam score throughout the week. The players who experienced the game liked it, but in the end there just wasn’t enough of them to guarantee a healthy online community and keep the game’s matchmaking alive for the long run.

“The lesson to take home is that, though not the best, this outcome is a good one for everyone involved: its players won’t spend money on a game that won’t survive the long haul, the team can move on to a new Bossa project with a sense of closure having done their best with Decksplash, and we tried a new way of validating a multiplayer game. Should we have cancelled the game without this experiment, a ‘what if’ would always be there in the back of our minds.

“All in all, we create hundreds of games every year during our monthly game jams, the vast majority of them failing to even being shown to the players. Decksplash just went further than the rest before teaching us a thing or two, enabling us to go forth with yet another piece of the creative puzzle we put together every day.”

Below is a glimpse at Decksplash: