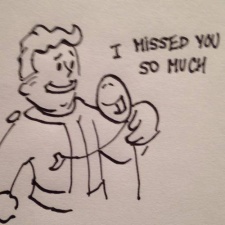 RPG development legend Chris Avellone, who has worked on titles such as Fallout 2, Fallout New Vegas, Prey, KOTOR 2, Divinity Original Sin and… you get the picture, has changed his Facebook profile pic to a hand-drawn picture of someone hugging the iconic Vault Boy.

There’s a caption, too, saying ‘I missed you so much’.

This isn’t the first Fallout-related picture that the game maker has put on Facebook recently; around Fallout’s 20th birthday he put out pictures of Vault Boy reading the RPG bible, reading a plot script and nursing a massive brain (below).

Thus fans have been speculating that something new in the Fallout universe, potentially a new game, might be on the way! Keep your eyes peeled.