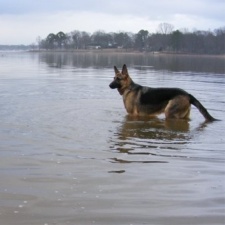 Microsoft and Bethesda has donated $10,000 to US charity the Humane Society following the death of the dog who inspired Fallout 4's Dogmeat.

In a post from the Xbox Twitter account, the Big M revealed that it was giving this money to the Montgomery County Humane Society in honour of the now-departed German Shepherd, River. She was owned by Fallout 4's lead level designer Joel Burgess – now at CapyGames – who announced that she had died on June 27th.

"I said goodbye today to River, who most of you know as Fallout 4’s Dogmeat," Burgess wrote on Twitter.

The Montgomery County Humane Society has replied to Microsoft and Bethesda's donation, saying that the organisation is "honored to be a part of River's legacy."

Dogmeat has been a recurring character in every mainline Fallout game to date, acting as the protagonist's sidekick. River did the motion capture for the iteration of the canine companion who appeared in Fallout 4.