Gearbox winds down work on Battleborn 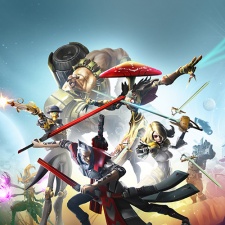 It looks like Gearbox Software is ending work on its team shooter title Battleborn.

In a post on the developer’s forums, the game’s creative director Randy Varnell said that there was no content planned for release after the Fall Update later this year.

The developer said that the shooter’s servers would be up and running for ‘the foreseeable future’, but that Gearbox was now focusing on a ‘highly anticipated project’ that is likely Borderlands 3.

“It’s been a while since I’ve communicated with you directly, so I wanted to take the opportunity to write to you as Battleborn rounds another milestone in its life,” Varnell wrote.

“As of this week, there will be no more Battleplans and there is currently no planned content after the Fall Update. Details of any future changes or news will be made on our forums or through social media, so keep your radars on.

“Never fear. Battleborn is here to stay. Nothing is changing with Battleborn, and the servers will be up and active for the foreseeable future. We announced the Fall Update for the game at PAX including some new skins, themed around some of your favourite Borderlands characters.

“If you’ve been paying attention to recent news from the Gearbox Panel at PAX West, you’ll have heard that many folks at Gearbox are working on a highly anticipated project. Although I’m sad my time on Battleborn is coming to a close, I’m happy to announce that I will play a significant role on this highly anticipated but unannounced game, and I’m sure you’ll be hearing some from me again in the future regarding Gearbox games.

“I’ve been working on Battleborn nearly exclusively since 2012, and in some ways, that work stretches back to 2009 for me. It’s been a long labour of love with many of my good friends at Gearbox, and I’m proud to have shared that journey with you, our community. Your spirit and loyalty have been a constant inspiration to the team at Gearbox.

“Also, I want to personally thank you for giving Battleborn a chance and dipping down into a new universe with us. We make games for you. And many of you have shared with us how much Battleborn has meant to you personally.

“It’s always a bittersweet time when transitioning from one project to another, but also offers the opportunity to step back and enjoy the game we created. Keep an eye out for me in game.”

Battleborn launched in May 2016 to muted sales, with many speculating that the similar but totally different Overwatch might have taken some potential Battleborn players. Gearbox boss Randy Pitchford himself said in a recent interview with IGN that he thinks Blizzard’s title didn’t really affect sales of his game.