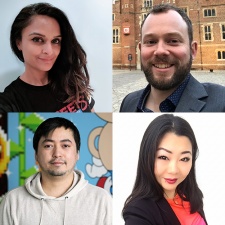 The final Sega vet is Bobby Wertheim (pictured, bottom right), who has been snapped up as VP of partnerships. Before this he was director of content over at the Sonic firm and has also worked at PlayStation Europe.

Curve's fourth hire is Jay Shin (pictured, bottom far right), who comes on board as business development manager. Shin is currently a lecturer at the University of West London as well as the director and co-founder of indie studio Arrogant Pixel.

“I’m extremely pleased to welcome Ranj, Rich, Bobby and Jay to Curve Digital,” said Curve's CEO, John Clark. “I know first-hand the impact that Ranj, Rich and Bobby will have having worked with them before, and it’s great to be able to add Jay to the team. 2021 has been strong with titles such as The Ascent and Lawn Mowing Simulator, and I’m delighted to continue assembling such a strong team at Curve as we build for further growth.”

This is the latest wave of top tier hires that Curve Digital has made. Clark, himself also a veteran of Sega, joined the indie label as CEO back in December 2020 from Tencent Europe.