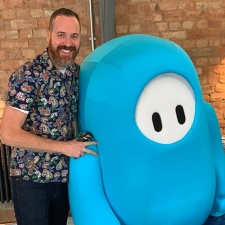 The developer of smash hit Fall Guys Mediatonic has found its new home in Leamington Spa.

In a blog post on its site, the firm revealed that it was setting up a new office at the town's 1 Mill Street creative hub.

This venture will be led by vice president of art Phil Warner (pictured) and will be working alongside Mediatonic's headquarters in London as well as its Madrid studio.

"More than anything, Mediatonic has always looked for a sense of community in our studio locations—that’s something we feel is hugely important within our teams, but also in the way we engage with other local games companies and developers," Warner said.

"We've already built some brilliant relationships with other games companies within the town, and we're hugely appreciative for the welcome we've received from both the industry and the local council.

"For our part, we’re excited to join such a vibrant game development community and look forward to the opportunity to share expertise and stories."

This news follows Mediatonic forming a new parent company in Tonic Games Group in June. The company's recently-released Fall Guys sold 10m copies on Steam alone between its launch in August and the end of September.