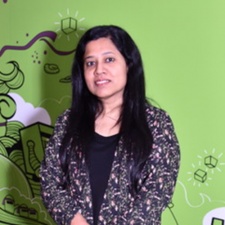 Vijayan rejoins this branch - Sumo Video Games - in the top job having previously worked as studio head between 2010 and 2011. Prior to that initial stint at the Pune-based outfit, she worked for over 16 years as head of games studio over at WOI.

“It’s an exciting time for Sumo, and for game development in India," Vijayan said.

"There’s so much potential here and, combined with the unparalleled game development services we offer, we’re going to build on the foundation of our teams’ impressive achievements.”

Sumo Digital MD and co-founder Paul Porter added: “I’m delighted to welcome Deeptha back to Sumo. Her record of outstanding expertise in game development and management will help drive our ambitious plans in India.”

Sumo's Indian outfit was founded back in 2007 and historically been a support studio for the company's other branches. While in the past it has provided art and animation assistance, it now handles work including engineering, design and coding.

Sumo went public in the UK at the end of 2017 and has since been investing in its development portfolio, buying up CCP Newcastle, The Chinese Room from Brighton and Huddersfield's Red Kite Games.