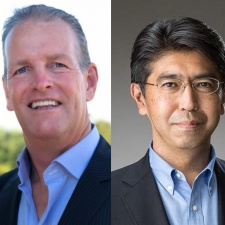 Sega of America COO and president Ian Curran (pictured main, left) has been assigned an additional role as president and COO of Atlus USA.

Curran took on his current position at Sega of America back in August, with a placement on Atlus USA’s board of directors.

Hiraoka will focus on his new role as Atlus brand owner to promote the company’s games worldwide. Hiraoka's leadership is attributed as a key factor behind the success of Persona 5, Catherine and the Shin Megami Tensei series.

Curran and Miyazaki will be working together to further the financial goals of both Sega of America and Atlus USA.

“I'm so proud of the work we've done at Atlus U.S.A., Inc. and Mr Miyazaki and Mr Curran will continue to guide the company to even greater success," said Hiraoka, who also holds a position as senior VP of SEGA of America.

"I look forward to creating more exciting projects with the creative team at ATLUS in Japan, and wish my colleagues the best of luck growing the business in the Americas and EMEA."

Curran continued: "I'm eager to grow my role as the new President and COO of Atlus U.S.A., Inc. and greatly appreciate the support that Mr Hiraoka has given me up to this point.

“Across the SEGA and ATLUS families, we've had an incredibly successful year, and there is still so much to look forward to.”

Miyazaki closed the statement, and said: "I'm thrilled to play a greater role in the continued success of Atlus U.S.A., Inc. and work alongside Ian, who has done an incredible job in just a couple of short months in his role as President and COO of SEGA of America."