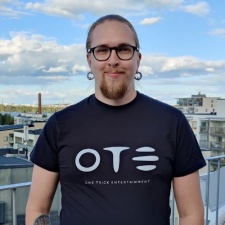 The Big Indie Pitch is getting bigger and bigger as we bring it to events all across the world. To give you an idea of what the event is like, who attends the events and the games on show, we've sat down with several past Big Indie Pitch contestants to offer their views.

Today, we're speaking to Esko Maijala from One Trick Entertainment, who submitted Lempo to The Very Big Indie Pitch at Pocket Gamer Connects Helsinki 2022 and walked away as the runner-up.

Esko Maijala: "One Trick Entertainment makes carefully crafted premium video games for PC and consoles, based on Finnish mythology. In the future, One Trick aims to be a remarkable employer in Finland."

I was born in 1991 in Finland. Since my early childhood, I got dragged into the world of video games via NES and tabletop games, like DnD and Warhammer - mostly because of my elder siblings. It was love at first sight although it took me 30 years to realize I could do something I love for a living.

My good friend from my teenage years, Valtteri (our CEO) contacted me one day in 2020 and quite randomly asked if I would be interested in joining him in creating a video game. He has a strong professional background in software engineering and a passion for video games, writing, and world-building so I thought, of course, "it would be cool, he knows what he's doing". Valtteri showed me Unreal Engine 4 and it was clear we needed someone who can master the visuals. Oskari (our AD) was the first and the best option for this role since I had seen his art before and I knew he was an HC video gamer, the same as Valtteri and me. Oskari was immediately ready to join the ride. My responsibility was, and still is, to write the game together with Valtteri and work as a director and Unreal Engine generalist - which we all are nowadays.

In summer 2021 we looked at our game and thought we could really do something with it. Since we had progressed amazingly well as a team and the game started to look actually really good, we decided that we will turn our hobby into a serious one. We all knew at that point that making video games for a living would be a dream come true - something we all had at some point in our lives dreamed about. To fast-forward things: one thing led to another and soon we had in our hands a publishing deal with PID Games and we quit our then-jobs. One Trick Entertainment was founded. "If we are gonna do this, we are gonna do it with all we've got."

Tell us about Lempo that you pitched at the competition.

Lempo is a first-person game with an emphasis on using your brain and delving into the carefully crafted atmosphere and lore instead of using an AK47 to just shoot things (which is also super fun, but not what Lempo is about). In Lempo the player takes the role of Paul who is a regular everyday normal guy. To make it short and not spoil the story: The player leaves their workplace one evening, gets lost, and ends up in Metsänpeitto - a mysterious and dangerous world ruled by the goddess Lempo. The point of the game is to escape Metsänpeitto.

What do you think are the most unique and interesting aspects of Lempo that gamers may never have seen before?

As a horror game Lempo has a unique world in which the setting takes place. We decided to avoid the major horror game cliches such as the asylums, hospitals, horror mansions, and such things. Lempo combines beauty and darkness together and it aims to be a meaningful experience for the player, and of course, the Finnish mythology on which Lempo is based. A land of darkness and cold and its old folklore is a great source of inspiration. I must not forget the SOUL TREE among other things - what is that you may ask, check out Lempo when it comes out and you will know.

Lempo is a psychological horror game based on Finnish mythology. What made you choose this genre, and what do you think you bring to it that may not have been seen before?

From the beginning of the project, we knew we wanted to make something fresh. Something that challenges the player and the community. No hand holding (let's hope this was the right decision, haha) and no cheap tricks like constant jumpscares. A story and a world that evolves and gets deeper and scarier, and at the same time hopefully gives the player more answers also.

We felt Finnish mythology is super cool and little is known of it globally - and still, such geniuses as J.R.R Tolkien were fans of it. It also gave us quite free hands. We thought: "Let's BASE the game on Finnish mythology and we can do whatever we want with it." So I must point out that Lempo is not trying to be your fact guide to Finnish mythology, but it will be a fresh experience in the genre of horror games.

How did you come to choose the platforms that you would develop Lempo for?

We love meaningful games with great stories that can be experienced on a big screen, and with the limited resources of the team, we wanted to focus on PC first. We ourselves also love to play games on PC and consoles.

Well... It has been a quite rough road, to be honest. And at the same time the best ride of our lives. There's been a ton of things we needed to learn through the hard way, and many times more things to come. It is a constant learning experience - with the games and especially with running the studio and the business. A huge thanks go to all the industry professionals and the people who have taken us under their wing. It's all about networking and admitting you can't be a pro in all aspects of whatever industry. Personally, I notice every week that I've come a long way from what it was just a week ago. It's funny and sad at the same time.

Financially speaking it has been hard to find contacts that would join and help us in achieving our goals. Lempo will be our first title in our track record and we believe it will smoothen things in the future - as it is a super awesome game, but just the tip of the iceberg when it comes to our future ideas.

Are there any tips and advice you would give to an independent developer out there who is just starting out?

Stay humble, stay true to yourself, make lots of contacts, and don't give up. If you decide to go crazy and take the leap of faith as we did then build a team. Don't go alone thinking you can master everything, because you can't. A solid and passionate team is key. Make games you would love to play. Don't try to please everyone and remember that although it is your own studio you are running, keep your ears, eyes, and mind open to other opinions.

The Big Indie Pitch was simply put super fun. All of the judges were genuinely interested in Lempo and the mood was relaxed and fun. Pitching was easy because of the relaxed atmosphere. If you are gonna take part in Big Indie Pitch, just have fun. The judges won't bite, at least this time they didn't.

Well, of course, pitching experience. Using the short time you have as efficiently as you can - though I could be better with this, to be honest. The prizes warmed the heart also and gave a nice boost to One Trick Entertainment.

We hope Lempo will find its fanbase and the Internet will explode over all the theories of what is really happening in the game. We hope different gamers all around the world, no matter their gender, age (though the game probably isn't the best option for the youngest), or background, all enjoy the experience and have fun with it.

As for the future, I can say politely that we have started the concept work for our second title which will prove One Trick Entertainment is actually much more than one trick. Thank you.