The Big Indie interviews: Pewter Games Studios tell us how a little bit of madness has brought a lot of success 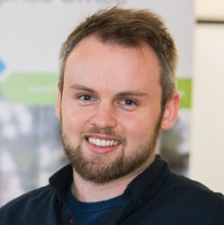 Today, we're speaking to Christopher Conlan, who submitted Filthy Animals Heist Simulator to The Big Indie Pitch (PC+Console Edition) at Pocket Gamer Connects Digital NEXT sponsored by our season sponsors Kwalee, and walked away as the winner.

Christopher Conlan: The Filthy Animals dev team is actually a co-development between Pewter Games Studios and LoPoly Games, but that’s still only a total of four developers. Aside from myself, we have Ben Clavin, Brendan Sutton, and Lee Cullen.

Our inspiration loosely came from a taxi ride we took during GDC a few years ago. The driver was named Tony, and he wore fingerless gloves. We thought he was pretty cool, and we imagined him as this sort of getaway driver. At the time we had already begun thinking of a silly game involving characters that turned into ragdolls at the drop of a hat, so it all just sort of merged together.

Tell us about Filthy Animals Heist Simulator that you pitched at the competition.

So Filthy Animals is a game where you play as a previously unwanted animal who was taken in by Tony, a mad scientist/getaway driver. He injects the animals with a special serum that gives them the ability to walk around and interact with things like a human, and then he sends them to pull off heists for him. The ‘simulator’ part came from the fact that you can manually aim each arm in order to hold and grab things. We did add the option to have the arms move together and grab things automatically though.

What do you think are the most unique and interesting aspects of Filthy Animals Heist Simulator that gamers may never have seen before.

When we set out to make Filthy Animals Heist Simulator, we knew we wanted to make it a physics-based game that featured active ragdolls. There are a few games that do that already, but we felt that in some ways they could lack depth, instead of focusing almost entirely on the mechanics of ragdolls themselves. With Filthy Animals, ragdolls are a core feature of the game but there’s a lot more to it – even a narrative of sorts.

At the same time, games that involve pulling off heists are often quite serious, or skill-based. We wanted to create something that involved heists but was silly and slapstick and accessible to everyone. So far, we’ve had positive feedback from players of all ages, so I think we’re doing something right in that regard.

Filthy Animals Heist Simulator is a comedy filled heist-em-up filled with larger than life characters and out of this world challenges. What made you choose this type of game, and what do you think it offers that players may not have seen before?

I think primarily we wanted to make a co-op game, so something like this where there’s an overall objective to work towards together, while also being chill enough at times to goof around and do silly things that can sort of turn into its own emergent gameplay lends itself to our vision pretty well.

One thing that players for sure haven’t seen before is the way you bring dead teammates back to life – pick up their remains, flush it down the nearest toilet (where it ends up back in Tony’s lab, of course), and watch as your friend is given a fresh lease of life.

How did you come to choose the platforms that you would develop Filthy Animals Heist Simulator for?

We’re targeting both PC and Console, but the specific console platforms that we’re planning to release on are TBD.

Certainly not easy. I look at other indie studios composed of developers that have previous AAA experience as having a good leg-up, but for studios like ours which were originally founded straight after receiving our degrees, it can be difficult as there’s a lot to learn. That being said, we managed to get our previous title – The Little Acre – published and released across all platforms. I think it’s looking good for Filthy Animals Heist Simulator too.

For a start, I think a common but sensible tip is to really think about the scope of what you’re trying to achieve with your first title. Aim for something feasible that plays to your strengths. Another tip – and this is something that pretty much everyone struggles with – is to be vocal about your project. But it’s worth doing because as well as building a community along the way, you can create opportunities that could help your studio even further.

Really fun, though it was a bit more intense than I had anticipated – I clearly didn’t read the rules well enough beforehand and was expecting a single pitch, not four back-to-back. Also, when you think ‘5 minutes’ you might think it’s easy, but actually getting across the valuable details in that amount of time is tricky. There’s barely time for any pleasantries with the judges before you just have to launch straight into it. Speaking quickly is basically a necessity. Regardless of the end result though I think it was worth it for everyone, both for the experience of pitching itself as well as the feedback afterwards.

I think being able to condense so many details about your game into such a small amount of time is incredibly useful, so I’m glad to have found that the judges liked the game and felt that it was a strong pitch. I also made a few contacts through the PG Connects Digital event itself, so I’m hoping to continue conversations with them.

We’re hoping that players enjoy the game as much as we do. I think it’s a good sign that we have to play it so often for testing purposes, but we always end up laughing at the things that happen. I can’t wait to see others have the same experience.

We have other projects at various stages of development, so we’re looking forward to being able to show more about those in the future.