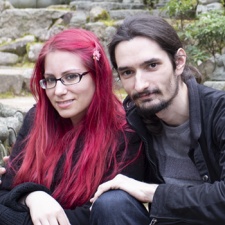 Today, we're speaking to Joana Dimas and Sérgio Gil from Foresight Games, who submitted Project Haven to The Digital Big Indie Pitch #3 (PC+Console Edition) in association with The Indie Arena Booth and sponsored by G-Star and Chorus Worldwide and walked away as the champion.

Joana Dimas and Sérgio Gil: Foresight Games is a two-person indie game studio located in Portugal composed by Joana Dimas and Sérgio Gil. We started back in 2015, with the massively successful and quick Steam Greenlight campaign, and since then we have been dedicated to creating Project Haven, a challenging tactical game with a deep story that will hopefully inspire other passionate players of the genre.

Tell us about Project Haven that you pitched at the competition.

Project Haven is a tactical turn-based RPG that is currently being developed for PC to be released on Steam. The game takes place in a not so distant future where players take the role of the leader of the Steel Dragons, a mercenary outfit fighting for survival in the harsh streets of Haven City, the last city of Earth.

The game features a unique free-aiming system that uses simulated projectiles, flexible tactical combat with unrestricted navigation, advanced weapon mechanics and a classless RPG character building, bringing the intricate mechanics of the classics to the modern tactical turn-based genre. And thus, offering a challenging way to play a dark story, full of desperation and dark secrets, especially aimed at a more mature audience.

Project Haven is a deep and highly strategic turn-based RPG. What made you choose this genre, and what do you think you bring to it that may not have been seen before?

We’ve always wanted to play a game like Jagged Alliance 2 in co-op, but there was really nothing out there like it. Recently there’s been games like the Divinity: Original Sin series that scratched the itch of modern Turn-Based co-op games, but the setting and tactics involved, although we love them too, aren’t the same. So we set out to create something we would want to play, a highly tactical turn-based game with a heavy story component and RPG elements.

With Gears Tactics recently coming out, we’re starting to see more of the story component in non-fantasy turn-based games, and although they’re using a different formula from the 2 action games like XCom, there’s still a lot of depth that can be added in the gameplay mechanics. This is what we think we bring that’s new, the tactical elements seen in the classics of the genre, along with the story and narrative component of more recent games.

How did you come to choose the platforms that you would develop Project Haven for?

PC is the home for Tactical Turn-Based games, so it was a no-brainer to release first on the PC. Especially with the added mechanics, our game has, having the control keyboard and mouse gives is extra helpful.

Every day there are more and more games coming out and it’s definitely harder to stand out in the crowd. At the same time, the audience is also growing larger and more selective in the games they play. However, we believe this actually poses an opportunity for indie developers, as we are able to try out things larger studios can’t, simply because it’s a niche or a riskier proposition for them.

Find your own audience. Don’t create a copy-paste of other games. Again, with the amount of games coming out, if you’re just doing the same thing that’s already out there you’ll just end up being buried under all those games.

It was our first time pitching in this format. We went in thinking it could be an interesting experience and maybe get some feedback on the game. And we definitely weren’t expecting to get any of the prizes! Even besides winning first place, it actually ended up being something a lot more interesting and rewarding than we anticipated. Just chatting and hearing the experiences of all the other developers and judges was great and something we hope to repeat again soon.

Due to having a time limit for the pitches, we are now capable of explaining our game to anyone in a fairly short time but still portray a pretty accurate picture of what the game is about. Sometimes, as developers, we like to explain all the nitty-gritty details that make up our game, but there’s not always the opportunity or time to do so. It’s definitely a super useful skill to have!

We hope that the game resonates well with the players as it did with the judges. It’s a combination of elements that are not often seen in the genre. We have built, what we think, is an interesting universe around the game and we hope to be able to explore it further in future projects.