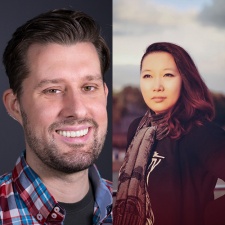 In its 19 year history, Splash Damage has garnered a reputation for making great multiplayer shooters.

The firm's life started with the Enemy Territory entries in the Wolfenstein and Quake series, and since the studio has made the multiplayer components for blockbuster titles such as Gears of War 4, Gears 5 and 2013's Batman Arkham Origins.

While its most recent title, Stadia-exclusive Outcasters, checks the multiplayer and shooter boxes, it is far from a gritty experience. It's colourful and chaotic with a vinyl-themed art direction for its characters and worlds.

The title started out as a game jam project. Splash Damage wanted to do something different with the multiplayer shooter skillset it had built up over the years. The result was an experience where shooting straight wasn't the aim of the game.

"We started by asking ourselves what it would look like if we started bending the shot," product lead Lily Zhu (pictured, top far right) explains.

"From there, we had a build that worked pretty well right from the start. And then we touched upon the fun that we found pretty early on with this short session with this very engaging gameplay. So we took it from there. And now we're presenting to the player is like the grown version of what we had before."

Right now, Outcasters features two modes. The first is 'Last Caster Standing' and bears more than a little resemblance to the battle royale genre with players fighting to be the last alive in an ever-shrinking arena. The second is 'Gold Rush', which is more of a collaborative experience, where teams compete for victory. The studio promises a long roadmap of content in the future, too.

While Outcasters isn't all too different from Splash Damage's development heritage, creating games for a streaming platform comes with its own challenges. For one, when you're building something for console, PC or mobile, you know how the game is going to be played. But something that can be experienced on all of those devices can be a nightmare from a design perspective.

"Readability is the key thing," Splash Damage CEO and co-founder Richard Jolly (pictured, top right) explains. "That's why we've chosen the art style we have – something that's very clean, elegant and evocative of the kind of vinyl toys that we will have littered on our desks.

"UI is also really important. You need to scale to all these different resolutions, but as long as you're building and testing your core systems with readability in mind, it's just a design consideration. That's something we've been mindful of throughout development because we want people to be able to play Outcasters on any screen and still have the same experience."

Developing for Stadia has come with a number of advantages, too. Splash Damage has been able to design Outcasters knowing that cheating isn't possible on Google's cloud infrastructure. The studio has also discovered another bonus of working on Stadia during the recent COVID-19 coronavirus pandemic.

"To pick an example, playtesting a game sounds easy, right? You push out the build and everyone gets it," Jolly explains.

"But when you have to worry about latency, or what people's internet connections are like, as well as whether everyone has the right build.

"With Stadia, you just need to send people a link and they're playing it straight away from the server. It's been effortless in that in that regard. It's been super useful for just continuing productivity because I guess this is kind of part of the magic."

Stadia might have launched in November of last year, but the tech is still evolving. Outcasters is Google's first big multiplayer game and the team has been taking lessons from its developers about what they need from the cloud platform.

"We've been focusing on evolving and building on the platform technology," Stadia Games and Entertainment executive producer Justin Lambros explains.

"We want to allow our games user research team to be able to bring in folks give them access to a build for a short time and play and get that same sort of feedback. Playtesting functionality is something that we've really dug in on. We've had a lot of help from the folks at Splash Damage."

Stadia's launch wasn't the strongest. The platform rolled out with a weak launch line-up of games and missed many of the features that had previously been announced. But Lambros insists that Google is in this for the long run.

"One thing that Google does with all of its products is really speak to the long term vision and that idea of a billion gamers," he says.

"There's a lot of things that we want to do with the platform in the long run, but like anything Google launches, we put it out there, we evolve, we listen to the feedback. Features come. We shifted around priorities. We've done a lot of learning since launch. This is a new kind of technology and a new kind of platform launch in the game space.

'Our goal is to show off the platform as best we can with the games. Outcasters is that kind of unique game that shows off a lot of really great unique aspects of Stadia will really be able to showcase what makes the platform interesting and different when it comes out."

There's no release date for Outcasters just yet, but for Splash Damage, the aim is to get the game out into the wild and to see how it evolves once people are playing it.

"That's the key thing. We're putting the building blocks together what we believe is a fun game," Jolly says.

"And we think that cool, fun mechanic and we want to build on that and grow it with the players as we continue to support the game."