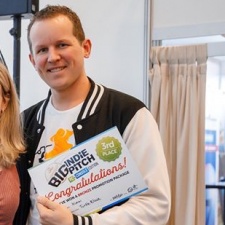 Today, we're speaking to TurtleBlaze's Bram Stege, who submitted KUNAI to The Big Indie Pitch (PC / Console Edition) at White Nights Amsterdam 2020 and walked away with the prize for third place.

Bram Stege: We are TurtleBlaze, an independent game studio based in The Hague. We are a three-man team; a programmer, an artist, and a producer. All three are avid gamers and have a rich taste in pop culture, but all three have their niche. In this way, we complement each other and are able to put hints and jokes about a wide variety of inspiration sources into our games.

We think of KUNAI as a quirky, fast-paced action platformer, or Metroidvania as you will. People have called it a "Metroidvania-Lite" because it is a lighthearted approach to the genre. At the core, KUNAI is a Metroidvania pur sang, but in the execution we put lots and lots of quirky stuff in there to put a strong emphasis on fun instead of, let's say, dying a lot.

What do you think are the most unique and interesting aspects of KUNAI that gamers may never have seen before.

We are very proud of the art style. We think it stands out between all those pixel art games out there. Also, it is, of course, a big nod to the Game Boy era which we all loved. If you take a close look at KUNAI you will find loads and loads more of these kinds of references.

Metroidvania games have become a really popular genre in recent years as retro gaming has seen a revival. What made you choose this genre, and what do you think you bring to it that may not have been seen before?

First of all, we all love the genre. We love Super Metroid, SOTN, Hollow Knight, Guacamelee, Axiom Verge, etc... Also, because this is our first premium title (our first title was a Mobile game called Road Warriors), we thought it would be wise to choose a genre that's proven and try to create something unique with a tried-and-true genre as a boilerplate. This saves a lot of discussion and time about the core of the game, so we can focus on the content, the art, the combat and making this game fun.

What we think makes our Metroidvania unique, is the emphasis on fun. We want to put a smile on your face while playing the game. We try to achieve this with the fun art style, the character of Tabby, the swinging mechanic and all the quirky stuff in there that makes no sense at all, but somehow does.

How did you come to choose the platforms that you would develop KUNAI for?

KUNAI actually started out as a mobile game. We still have a prototype somewhere. We wanted to look for a publisher for the prototype and bought tickets to GDC in 2018. So we had a lot of meetings lined up with cool publishers, but something was lurking in the back of our heads... we actually don't like mobile games. Deep down in our hearts, we want to create premium gaming experiences.

Also, in 2017 Nintendo launched the Nintendo Switch, so we thought: "Let's pivot this whole thing to the Nintendo Switch!". We reached out to Nintendo, got some dev kits and in four weeks remade the mobile prototype into a Switch prototype. This meant redesigning the game from portrait-based to landscape-based, reworking the control scheme, and learning how to work with a Switch dev kit. But it worked out, and we had the prototype with us at GDC and had a lot of people playing it all over town. That was a lot of fun. Also, because we made the game in Unity, porting the game to PC was a piece of cake and made a lot of sense.

Looking at the studio a little more now. How hard is it to survive as an Indie developer working in the PC and Console market?

This is something we are going to find out in the near future. We are lucky that we have a big company to support us. They believed in KUNAI and the team and gave us the opportunity to make the game. Now, we want to pay them back by having a game that sells well. How hard this is going to be is something that we will find out in the coming months.

Get a publisher. There is a lot of stuff around getting a game from a prototype to a successfully released product. There is QA, Press, Events, getting the right contacts, compliance, etc... It's nice to have someone showing you the ropes when you are starting out, so you can focus on making a kick-ass game. So, create a "vertical slice" of your game, polish it to the max and start reaching out to publishers at events. We met our publisher The Arcade Crew at Gamescom. In the States you have PAX, and in the east, there's Tokyo Game Show. We did them all. Also, make sure that you get a good deal from a publisher, and make sure that the publisher commits in the contract in terms of money. This can be funding, an advance in royalties or a minimum guarantee, but you want the publisher in there in the mud next to you. It should be a partnership.

I really like the fact it's set up as a speed dating session. This way you can focus on the game instead of the presentation.

When we started out two years ago we knew nothing about making premium games. We learned everything by doing a big deep-dive. Just by talking to people and doing stuff we learned everything we needed to learn. So now we know what it takes to create and finish a game. Now we want to learn the specifics of selling a game and what to do next.

Of course, we want the game to sell well, so we have money to create the next thing. This can be DLC for KUNAI, or a sequel or a new game. We haven't decided yet. It is all in the hands of the people who are buying (or not buying) the game, talking to us on our Discord server and giving feedback. But one thing is for sure, we hope we can get started on awesome new stuff very soon.