What we learnt at Games Helsinki 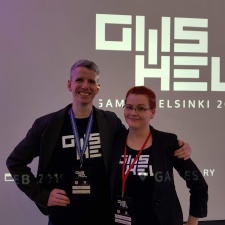 Helsinki is the spiritual home of mobile games, but it also has a thriving PC and console scene. To take advantage of this, the inaugural Games Helsinki took place at the start of February. It was a one-day mini-conference focusing on console and PC games. Described as “a small, intimate event” for the Finnish game scene, it took over the Games Factory for a day of talks, followed by networking. The event sold out its 100 tickets.

We love Helsinki and have visited the new Games Factory space a few times (the badge pick-up party for our own 2018 event took place there, so we know it well). The Games Helsinki event sounds like it could be the start of something useful for the PC scene there, so we spoke to organisers Ari Arnbjörnsson (right) and Eevi Korhonen (far right) about how it went and what was achieved...

Why did you arrange Games Helsinki 2019?
We both already had a background in organizing events here in Helsinki. Ari has been organizing the Finland Unity User Group for more than two years now and Eevi has organized LARP and role-playing conventions.

We saw that the bustling game industry in Helsinki had a very under-represented community when it comes to non-mobile game dev events. We took it as a chance to organize an event we ourselves would like to attend, that brings these developers together to share knowledge and mingle.

We were inspired by the format of Remedy’s Dev Days and DevCon Tampere, where it’s basically a one-day event with good and honest talks. The small conference size allows the speakers refreshing candidness in their talks and makes the after-talks programme that much more intimate.

How easy was it to get support for the event? Did Helsinki developers embrace it?
We wanted to keep the sponsors relevant to the conference. It was hard getting local game development companies to sponsor us, we couldn’t offer much more than just logo placement and tickets to them. They don’t have the same incentive to sponsor a game -development conference as, say, a service provider. Luckily we managed to get Housemarque and Epic Games to sponsor us which made it possible to have the conference.

The word definitely spread slower than we thought it would. We planned the ticket release expecting the tickets to sell out quickly because of the very limited seating, the pedigree of the speakers and word-of-mouth. Reality hit us hard when we went live and only sold a ticket or two per hour the first day which then slowed down to a few tickets per day.

But even with the gross underestimation of the power of social media and word-of-mouth, the sales were steady and we managed to sell out in the last week!

What made Games Helsinki 2019 special and distinct from other games industry events?
The fact that it was put together in three months?!

Well, the format isn’t unique as we were inspired by other events. What we emphasised was the small and relevant audience of fellow game developers and hand-picked speakers and topics. It allowed refreshing honesty from the speakers that we wish was present in more events. It’s hard for developers to share the real lessons publicly due to contractual limits or just fear of backlash from the public or their employers. We need to hear more about the times when things didn’t go so great and speak honestly about our failings.

From your perspective, what were the highlights of the day?
Even though we thought we knew what to expect with the hand-picked speakers and topics, we were still blown away by the quality of the talks. We also had this amazing band, From Grotto, playing music from the upcoming indie game Noita. It was an improvised performance with live visuals from the game and I don’t think anyone was expecting the amazing show we got!

Arnbjörnsson: I can’t possibly pick a favourite talk. Some that were relevant to me as someone who’s just taken on a lead role were Juha Vainio’s humorous talk about producing Remedy’s upcoming game Control, and Mariina Hallikainen’s talk on keeping the team and community motivated on their Cities games.”

Korhonen: I think all the talks were amazing, but as a narrative designer, I really liked both Brooke Maggs’ talk on narrative design in The Gardens Between and Greg Louden’s talk on directing, writing and designing his hip hop stoner noir game, STONE. There were good takeaways from both and they were just wonderfully honest about their process and lessons.

According to our post-conference questionnaire answers every talk managed to be many people’s favourite.

What was the most important/interesting thing you learned from Games Helsinki 2019?

Arnbjörnsson: “My most important thing I learned is that people actually want to help, and that I’m not inconveniencing people when I ask them to speak or volunteer or play music at the event. It felt ludicrous that the people involved were thanking me for organising, and I just replied ‘What? No, thank YOU!’. For the next one I’ll definitely seek out more help from others.”

Korhonen: “For me, the most interesting part was to work with a brand new event and how that was different from working with an established event with its own history and how things have been done. But it also meant that we had to work harder to market the event. Next time I’d definitely reserve more time for pre-event drum-up and communication since there were still some people – friends even! – who missed the event because they hadn’t heard about it in time.”

Why was the Games Factory a good place to host it?
For our first conference we wanted to start small and Games Factory had the exact sized auditorium for us. It’s also fitting that we both focus on the games theme.

It was very convenient for us that Games Factory managed most things regarding staff and catering, so we only had one bill to pay. Nice and easy as we’re learning the ropes of conference organizing.

What gives the local Helsinki industry its unique flavour?
The openness and interconnectedness of the scene. There’s a lot of cross-pollination between the companies via employees but it never feels competitive or closed-off, like “you can’t talk to those people, they’re the enemy!”. Everyone wants to see the others succeed, it’s not a zero-sum game. As it’s been said many times, the rising tide lifts all the boats.

Our IGDA chapter is also very strong, and Ari organises a lot of meet-ups, so we have plenty of community events and information sharing happening. We think Games Helsinki will definitely be able to find a place and audience here to elevate the local industry to the next level.

Can you give us any hints about future events in this series?
This was a trial run, and with all the positive reception, lessons learned and immediate anticipation for another one we think it’s a definite possibility. We wouldn’t want grow too much since we want to retain the intimacy, but we already have sponsor interest so we might be able to fly in some speakers for the next one.

PC Connects London: your guide to the year when PC Games change forever