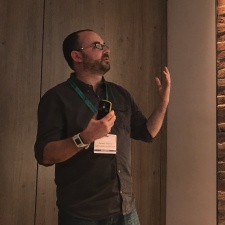 Ground Shatter boss James Parker is looking forwards by taking from the past with co-op cop shooter RICO.

Parker started the Bristol-based studio five years ago, after a 15-year stint in the UK games industry. When his last employer, Opposable, decided to pivot to VR and mobile, Parker parted ways - feeling there was still a market for “short-session arcade-style games” on PC and console.

After launching the arcade-style multiplayer brawler SkyScrappers in 2015, the studio set its sights down pistol scopes. RICO began life with a simple pitch - a co-op shooter based on high-octane buddy cop movies of the 80s and 90s.

"Would anyone play a first-person roguelite where you do drug busts on randomly generated drug cartel buildings as a pair of loose-cannon cops? Parker asks.

“The pitch was eventually pared down to 'Kick Doors. Shoot Men', which - if anything - is too short for an elevator pitch.”

Too short for a quick pitch, perhaps. But those four words drove nearly every aspect of RICO’s design, honing down the game’s core into a tightly-packed structure of breaking, entering, and assault with a deadly weapon.

“It mostly kept to that pattern. All the main pillars of the design were encapsulated there: kicking doors, co-op play, and procedural generation.”

For RICO, procedural generation let the team both save on content development time while reinforcing its quick-fire arcade style runs.

“As a small team, I knew that we were never going to compete with triple-A shooters on content, so level generation was a must, so all the systems were built around making every single interaction impactful and fun in itself.”

“We didn't really expand on the game until the shooting was really solid and the door kicking felt meaningful, and then we built everything out from there.”

Having a simple set of solid core mechanics also means Ground Shatter has a strong foundation to work with, giving them good footing for adding future content to RICO.

“RICO has been built to allow us to expand on it in lots of different ways, whether that's more weapons, more levels, more characters, or whatever," Parker continues.

"So we're really hoping to be led by the community on that, see what they engage with and what they want to see more of.”

The other half of RICO’s design is in placing co-op play front and centre. Party-based games are all the rage these days, but they tend to lean further towards the Destiny or MMO style of long-term high-stakes play than lounging back on a couch with a buddy for some laughs.

There’s a lot of nostalgia for that kind of play among large swathes of the gaming audience, which - while helpful for grabbing attention - comes with its own baggage and expectations.

“I suspect on PC the majority of co-op play is going to be online, but we're really keen for people to try it out in local split-screen as well," he says.

"All aspects of the game can be played couch co-op, which is something I really wanted to do as some of my favourite memories of gaming are sitting around with a friend playing together in the same room.”

“I get the same reaction from people with similar memories of Halo, or Ghost Recon, or Rainbow Six: Vegas. Especially where lots of companies seem to have dropped co-op play, we're hoping to fill that niche, and create some of those memories afresh for people.”

Selling a co-op focussed experience can be a balancing act, however. Ultimately, not everyone is able to wrangle up a friend to have the best experience with a title. You still need to be able to sell single copies to solo players.

“The messaging of a co-op game can be tricky because you want to shout about the co-op aspect from the rooftops, but we still get people asking if you can play the game single player," Parker says.

"Of course, they can, it's been designed to be a really good single-player experience, too”

We couldn’t leave Parker without getting more input on the ever-shifting state of selling games online. While there are arguably more online PC stores than ever these days, none of them are a quick fix for discoverability concerns.

“There are no easy solutions to discoverability, and there probably never will be," he says, "which is why you see people taking exclusivity deals on the Epic Store and suchlike, just to get that edge either in terms of visibility or get an additional boost of revenue.”

Even if the Epic Games store, Discord’s community-centric marketplace or Kongregate’s new Kartridge client platform aren’t game changers on their own, that choice is still an important change for developers and consumers alike.

“I'm old enough to remember a time before Steam came along and the PC market was declared dead every single month by some publication or other," Parker explains.

"And Steam changed a lot of things - mostly for the better - for a very long time, but I'd absolutely welcome better competition in that space. You'd hope that would improve the experience for devs and consumers alike.

“We're in a period of transition so it'll be interesting to see where things go.”