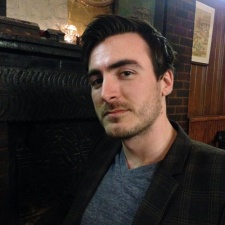 Indie developer Onebitbeyond has given itself a rather massive task.

But that being said, Robinson says he isn't that enamoured with roguelike titles.

"But we didn't like them - they all looked a bit crumby or weren't as polished as we'd hoped. We wanted to do a really fleshed out game. We wanted to do something inspired by Zelda. We wanted something with broader appeal than The Binding of Isaac. We'd look at things like children's animation, children's TV shows like Adventure Time - I know a lot of adults who watch Adventure Time and get a lot of entertainment out of it.

"We thought we could make a game that appeals to adults and kids and they can play together. We also want women to play this. We haven't found anyone yet who doesn't like the art style. Even if you go online, a lot of the comments are quite positive. It's weird."

it wasn't just a case of having a light and happy art style on just any old roguelike. Onebitbeyond wanted to approach Swords of Ditto like it was a title from a certain famous Japanese publisher.

"We have that knowledge, we know how to do it and those other platforms don't have that. If you make this for Switch, they already have a load of Nintendo style games. Looking at a lot of roguelikes, they don't have puzzle mechanics, not the kind that we do anyway. There's too much randomness. We wanted to make this random procedural but not look random and procedural. We wanted to make it look handcrafted. That was a technical challenge.

"It has been tricky. But we have been working on this for two years. I'm the only level designer, so there's a lot of pressure on me to do this, but I've figured out how to make randomised levels that seem different every time but look handcrafted."

Robinson says that going indie from Curve wasn't a case of wanting to be more in control of what he and Biddle were doing at. Rather, it was a case of wanting to work in a more chilled out space. This is likely born out of the fact that just before the duo left Curve in 2015, the indie outfit had massively expanded and was now moving more into publishing.

"When we were at Curve, we were in control of the design anyway," he says.

"So we haven't got more power over the design of the game. We work home now, in our bedrooms, and there's something very liberating about that. There's something very nice about not having distractions all day and meetings. I feel like we get way more work done. It's a lot better. There's no stress. It's nice knowing everyone you are working with is there for the work, there's no messing around. Because it's a small team you can see what everyone is doing all the time. There's no hiding away not doing work."

The game is set to come out tomorrow and, honestly, Robinson isn't sure what to expect from the launch. The developer cites the positive reception to marketing for the game but worries that this has just elevated what people expect from the indie title.

"Well, people keep saying we are going to do very well," he laughs.

"And it's had such a positive reception. E3 was crazy; we had back-to-back journalists coming in all day. Everyone left fantastically happy. The trailer created such a buzz. But you never know what it's going to be like on launch. We may have raised the bar of expectation so high that it falls short. It's always a concern. You never want to disappoint people. We've had such a good reception to this, it's better than anything but we don't want to count our chickens. We're hoping it does well."