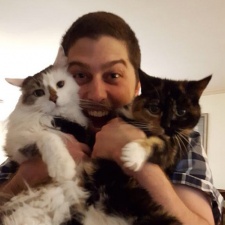 Back in 2014, Terrible Posture Games - aka one man dev team Joe Mirabello - released a 3D bullet hell title Tower of Guns on PC

The title met with positive reviews overall, with Grip Digital coming in to help out with the console ports. Now the two companies have joined forces to make a brand new game, roguelike bullet hell project Mothergunship.

"The core of it was making something that was a highly-polished more refined version of what Tower of Guns did well while also tossing out the things that didn't do well," Mirabello explains.

"Tower of Guns did some stuff very well - it explored bullet hell mechanics from a first-person perspective but it was not co-op and that was the number one thing that people wanted. We wanted to have co-op from Day One. There wasn't a lot of variety in the guns so we wanted to have that and make the game feel different.

"Right from the beginning we explored a very elaborate crafting system that is based a lot more on modular pieces and playing with LEGO and less on cosmetic crafting type stuff that you normally see in a first-person shooter. We were looking at what other games were doing and we saw stuff that wasn't really crafting or customisation, it was the ability to put a scope on your gun or extra clip. it was trivial to gameplay and may have allowed for some variety but didn't allow for creative expression. This is a lot more like a space simulation game; those titles where you can build a ship and put wings on it to change the behaviour? This is like that. You can put ten barrels on your gun. You can put a bounce cap and a load of flamethrower options for your gun and everything will start bouncing around all over the place. That becomes really exciting. It allows the player to really explore the mechanics of building what they want to and really allows them to steer the gun in ways that we did not expect."

This free-form crafting system, while creating a lot of variety for end users, does mean a number of problems for both development and the playtesting teams.

"The playtesters hate us," Mirabello laughs.

"There's quite a bit of complication about how to resolve some design problems. There are tonnes of reprocutions from this decision. We knew we wanted to stick to this decision, we knew we wanted this free-form crafting system. We knew it was exciting and different and that it was really empowering, so we were looking to build the game around that core idea of letting people build whatever they want. Sticking to that tenant and putting a stake in the ground and saying this is important to this game's unique feel, everything else was informed by that decision. The balance, the projectiles, the difficulty, the meta progression system, the roguelike elements of permadeath and knowing what players are going to experience steered the rest of development around it."

Implementing some form of meta progression system was just one of the lessons that Mirabello took away from working on Tower of Guns.

"There were good things and bad," he says.

"The game was lacking in a meta progression system and day one, people were asking for something to keep them playing again and again and again rather than doing a single run. We needed to give people a taste of progression. Right away, we decided to resolve that.

"Gun feedback was a big thing, too. Tower of Guns didn't have great feedback, it didn't feel like you were shooting something that was meaty. Everything felt weak and anemic and here it's like 'okay, let's focus on gun feel and it's pretty tricky with the gun crafting, but we need to break it down for gun feel into tangiable, repeatible components that we can then modulate with what the player does to their gun. Getting gun feel to be something that's almost dynamic is pretty tricky - how you handle recoil, the change in camera shake, the sound effects - all of that needs to be able to adapt to this crafting system. It's an interesting puzzle; turning something that is by its nature very gut-driven and turning it into something that's very parameter-driven was a trial. We did a pretty good job there. Certainly better than Tower of Guns."

Mothergunship is set to launch at some point during 2018, with Mirabello being in high spirits about this new release. This is, in part, thanks to the Tower of Guns fanbase already being rabbid for something similar to that title.

"We want this game to succeed and we want it to grow," he says.

"We want to be able to build a community around it and we really want to get people involved in this gameplay. We hope that players will like it and have a community thriving around it. We like the gameplay, we like the core gist of the game but we want to continue to give players that kind of content. Feedback so far has been pretty positive. The Tower of Guns fans are already on board and are excited. They have almost become evangelists for us - we want to give them something they'll be happy with. But at the same time this isn't a Tower of Guns game; we don't want to fool anyone into thinking it is. This is bigger than that game was, there's 15-times the number of people working on it. It's well beyond just me. Tower of Guns was just me; this is not in anyway what so ever."

PGC Helsinki Digital: What is going on at [email protected]

Indie studio Vlambeer is closing down after 10 years