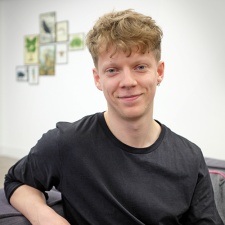 The trailer can most accurately described as colourful chaos, with lead game designer Joe Walsh telling PCGamesInsider.biz that part of the pitch was to create a multiplayer experience reminiscent of knock-out TV shows like Takeshi's Castle and Total Wipeout.

"We were sat around talking about cool games we could make where we could have loads of people against some sort of system," he explains.

"We knew we wanted it to be the people versus the game and we were throwing around a couple of different ideas - maybe it was going to be dungeon, maybe it was going to be monsters. But we felt that no-one has ever made a game where it's the players versus the obstacle course. We all loved Takeshi's Castle and Total Wipeout back in the day and all agreed that someone needs to make this game and it might as well be us. That's where it started. The first design document we did was something like four gifs on a page of stupid impacts with lots of people. We looked at it and knew we had to do it."

When it was first announced, many compared Fall Guys to a battle royale game. Walsh and Mediatonic, however, see it as something else entirely.

"We've been calling it 'party royale', which feels about right," the lead game designer says.

"We really love that adrenaline rush of being in the final circle in a battle royale game and we wanted to bring that same anxiety, that same heart palpitation-inducing tension but to a totally different, more accessible, more welcoming and encouraging kind of game. When you sit down and it's down to those final few rounds, you get that same sweaty palm moment."

In creating such a creative party game, Walsh says that the entire team - around 25-to-30 people - can add in ideas for levels. While it's been an iterative process, with some ideas that sound great on paper turning out to be not much fun in practice - and vice versa - the Mediatonic team thinks it has nailed down what makes a fun Fall Guy level.

"It has to have moments for epic one in a million chance impacts, it has to be funny and focused on player interactions and - above all - it has to be simple," Walsh explains.

"We want to be able to explain what the users are doing within a sentence. We want players to be able to jump in and have a good time without tutorials on every single level."

This simplicity is also apparent in the art style, which again is reminiscent of knock out TV shows, but is also the result of Mediatonic knowing it needs to be able to have a lot of chaos on going on at any given time.

"We knew we were going to have so many people and things on screen, we know we want to dress them up in stupid costumes that we felt we had to keep the levels visually clean and simple and let them speak for themselves," Walsh explains.

"But if you also look at the reference material of those knock-out style game shows, they are big, primary colours. We want things to look like they're inflatable and made out of crash mats or giant rubber hammers and so on. It all came together really naturally. We want clean, simple colours, nice textures and a blank canvas sheet to create a cool game."

The TV show comparison isn't just going to be in Fall Guys' aesthetic, either. Walsh says that Mediatonic wants to run the game like a series, adding in new content in seasons moving forward.

"Fall Guys needs to launch with a bang; we need the servers full of people so that the experience on Day One is as good as possible. But after that, what we love about Fall Guys is that it's inspired by TV shows which of course run in seasons," he explains.

"We want to do the same thing where each season runs about a month and we'll add a new set of levels that will go into the game with new costumes to unlock. Fall Guys launching is only the beginning and from there we'll keep on adding content. Maybe we'll add new features later down the line depending on what people want, but the idea is that Fall Guys will keep getting bigger, that there's more and more variety, there's more and more craziness. We'd love to do live shows on Twitch; streaming integration would be amazing. The sky's the limit really."