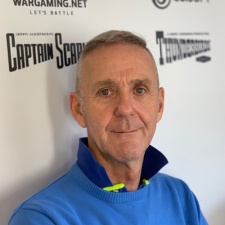 But The Koyo Store is doing something a bit different - selling pins and medals directly linked to a player’s in-game account, giving their virtual achievements physical form.

In this week’s Inside Track, we spoke to The Koyo Store CEO Lee Townsend on the merch maker’s first year in business - and how the future of esports could mean a lucrative future for licensed sellers.

Tell us about your company.
The company was formed as The Koyo Store in Jan 2018, but the original concept and business were born in 2014. Most, if not all, of the current online games, have a form of virtual achievement awards system connected to each player’s account. We came up with the idea of “bringing the virtual to reality”.

For example, you won a Top Gun Medal in World of Tanks, but what if you could buy it, own it and wear it in the real world?

The aim is to bring a new angle to the tried and tested ‘mugs, keyrings and t-shirts’ approach, most of which are peripheral to the game. We want to develop items that are integral to a game itself.

Our team has a strong and varied skill set with designers, retail experts and gamers making a great mix to produce epic merchandise and collectables.

How has the last year been for you?
The last 12 months have been exciting as we establish ourselves as leaders in this market.

There has been a lot of investment in R&D, which has resulted in some great new products with many more planned for next year. The hard work is paying off as we see more top line companies approaching us to bring their virtual to reality.

What recent successes have you had?
Working with Ubisoft for the last few months on Rainbow 6 Siege pin badges has been exciting and we are looking forward to working with several other top titles, which will be announced shortly.

Measuring our success is obviously reflected in sales, but also acknowledgement and recognition are important. We are seeing more and more brands approaching us and the ones we meet with at events have heard our name, which I think shows the success of our products and strategies.

What challenges are facing your sector in the market?
This sector is huge and flooded with ‘same’ or ‘same but different’ products - the sector needs to improve. The public doesn’t want price hikes but does want quality for their hard-earned money. Cheap and cheerful has been the way for so long that the sector as a whole needs to up its game.

Tackling the fakes that flood the market and giving the customer value for money with a genuinely licensed product is key.

What do you think are the most exciting market trends in games right now?
We have seen the advent of the Battle Royal in recent years and the massive growth in MMOs, which have both helped to drive wider interest in Esports. We see Esports as a very exciting opportunity for Event Pins, Coins and collectables.

With audiences in excess of 10,000 per event at venues across Europe and the world on a monthly if not weekly basis shows that Esports is here to stay. Could I be so brave as to say that Esports is the football of the Millennials?

What are your aims for the coming year?
We are looking to acquire more licenses and work with more top brands to establish ourselves as the ‘Go To’ for pins and collectables within the games industry. Looking at new ways to bring the virtual to reality and to help the game makers bond their audience to their brand by letting them own a tiny part of it drives much of what we do here.