"I tell stories with sound": Sitting down with audio design master Scott Gershin 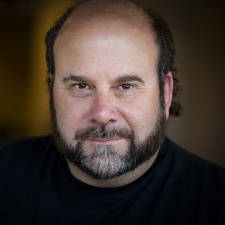 For over 30 years, Scott Gershin has been doing sound and audio design for TV and film, working on projects including Pacific Rim, Team America, Star Trek and American Beauty. So why are we writing about him?

Well, he's also done sound design for video games franchises including Gears of War, Resident Evil and Fable. We caught up with Gershin at Develop:Brighton 2019 to get his top audio tips, see how the process of creating for games differs to TV and film and what we should make of Keywords' investment in music, audio and sound firms

So, what exactly do you do?

I sit in a dark room making funny noises. What I do is tell stories with sound. In all the mediums I work in - film, broadcast, gaming, theme parks - anywhere there is sound, I like to play in that sandbox. I've done a lot of theme parks, a lot of VR, over 100 movies, over 200 games.

How does the process of designing sound for video games compares to the other mediums you work in?

Games is more diversified in audio than film and TV combined. In something like esports, audio needs to be used not as something pretty cool. It lacks emotion. What it needs to be is strategic. I need to know that someone is sneaking up behind me and they're on sand. They have to sound so much louder than you would ever think that footsteps would sound. Think of sound as being used as sonar. Do they want backgrounds? Nope. Do they want any sound that distracts you from gameplay? Nope? Are they looking for a cinematic experience? Nope. Audio plays a strategic function, especially spatial audio. That's one technique. It used to be that games wanted a cinematic approach - 5.1 speakers played out of a TV. That has a lot of similarities to film storytelling. Now we're getting a lot of requests about people playing with headphones, they don't want to disturb anyone in the house, so now we don't need to think about 5.1, it's stereo and really close to the ears. Now I have to be sensitive to the dynamics. I can't rock the room or I'll blow your ears out. Now I have to take a different approach. What does audio want to be? Is it a tool? Is it the pretty flowers on the cake? Is it the cake? In that way, the usages of sound within video games are unique. Meanwhile, movie and TV, it's all about the content but how you play the sound is always the same.

At what point should development teams start thinking about sound design?

Pre-production. If you are doing a mobile game, then we add little ear candy. If you are playing a game with any kind of navigation, any strategy, any emotion - that's storytelling. At that point, you need to know going in what audio you want to play at any given moment. In VR, audio tells you where you are going. Some games do the same thing. It keeps the pace, it keeps things either moving forward emotionally or it helps strategically. Especially in exploring games - audio plays a very vital role in games that are story-driven and has to be done in pre-production.

How have the companies approaching you changed over the year?

The complexity of audio has become much better. Also, I generally ask when people approach us to show me the game, ask them what it wants to be, what they're trying for, whether it's goofy and fun or realistic or hyperrealistic - what are they trying to do with this project, essentially. From there it's about making it the best it can be. I then ask them what they don't want it to be - early on in my career I worked with Oliver Stone for Born on the 4th July and I said: 'What do you want?' and he said: 'If I knew what I wanted, I wouldn't need you - I need you to tell me what I need'. That's been the way I work ever since. So I try and look at a project and go: 'What do I bring to the game? Am I a soloist in an orchestra, or just playing the triangle?' I'm okay with all of it. It's not about me. That's a big thing - I've done this for so long, it's not like I need to prove what I can do. What I want to prove is how I can help tell a story or create an experience. There's nothing better in games than being part of a hit project, not because it was a hit project, but because all the mediums, all the crafts fired really well at once and people enjoyed it. That's fun.

What is the video game project you are most proud of from your career?

I don't want to sound like I'm super old, but some of the most challenging and maybe most fun, was when I first started in gaming. We had no clue what we were doing, there was no rulebook. We got actors by saying to people: 'Hey, we like your voice, come here'. The technology wasn't great. You had to really think how you do something. I would say that 60 or 70 per cent was us going: 'Err, how do we accomplish this?'. Now that's five per cent. I think what's happening in gaming is that we know it's successful, let's do it again, and again, and again'. If you look at film and TV, what's changing in parallel is streaming. There are things on Netflix that would never be on TV and would never be in a cinema. You can now start making customisable content that's for a specific group of people. The news is that way now, whether you like it or not, and it's starting to become very for certain groups of people. Gaming is a little behind, not in a good or bad way, but it's making a lot of money. When you look at Minecraft and some of these games that exploded - everyone wants to make their own version of that, as people did with The Beatles. Look at what Riot has created with League of Legends. They've been so successful and everyone's getting into esports a fast as they can because there's money there.

What should we make of Keywords' investment into sound and audio space with Sound Lab, but also Cord and Laced Records?

I've been with Keywords for one year. I find it fascinating. One of the wonderful things with Andrew is he's bringing all of these craftsmen and artists together and letting them do it the way they know how to do it. That's unique in today's society. They get something, absorb it and we have to do it our way. There's a reason why they acquired a company - we're the experts, so they want to know how we need to do what we do. It keeps people really creative, interested and it gives them their own voice. Ultimately, I think it's good for the clients and it's good for Keywords. There is no Keywords style. We're all learning from each other with Cord, Laced and all these great groups. What's even greater is that because it's international, everyone has a slightly different perspective. It's like a brain trust. We have some of the best and the brightest and the smartest, put them in a room and then say: 'Here are all the challenges that exist in our industry - how do you solve them?'. It's good.