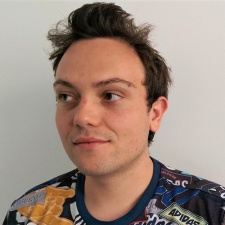 Each week, the Inside Track showcases the best service and support companies operating in the games industry.

This week, Techland vet Michal Napora tells us about his own games marketing agency, 32 33

Tell me about your company.
My company is called 32 33, and it’s a marketing agency that specialises in video games. Before I launched my agency, I worked for Techland and worked on triple-A games, such as Dying Light.

I started the company in the middle of 2016, with my first release being the PC and PS4 game Aragami. Since then, I helped with the post-release of Sherlock Holmes: The Devil’s Daughter, working on the upcoming open-world game The Sinking City, helped launched a new studio in Wroclaw called Strange New Things, and I have a few more announced projects in the works.

We offer a wide range of services, from individual parts of marketing - social, PR and so on - consultancy, to full-service work. Pretty much, we are a marketing department for hire.

How has the last year been for you?
Very busy, and a bit of a rollercoaster. Before I started 32 33, I knew that the first year/two years are critical to a new business, so I was a little bit worried at times. I had a bit of a 'professional bi-polar' syndrome, meaning that one moment I thought that the business will be doing great and I have a bright future ahead of me and the next moment I would be really worried for it and question my decision of setting it all up. However, after talking to other business owners - and not just in games - it seems that it’s something that majority of them go through.
Now I’m happy to say that the business is doing well, with some new projects and games being picked up which we will announce soon. I feel we got out of the harsh waters, and into calmer - more secure - seas.

What recent successes have you had?
From a professional point of view, I am happy that my business is moving along nicely and that I have new clients/projects that I’m really excited to work on. Also, my company has won its first marketing award – the MarCom Platinum Award for one of our Aragami trailers/social videos. I hope it’s the first of many.
On a personal level, I’ve done something really huge – I’ve quit smoking. I never thought that I would be able to do it, and here I am, 5 months without a cigarette. I feel really proud inside, and if someone like me can do it, anyone can.

What challenges are facing your sector in the market?
I think the biggest challenge will be oversaturation, and not just with games but with publishers. If 2016 was the year of the indie studios, then 2017 was the year of indie games publishers. It seemed like every weekend a new publisher popped up. With so much competition, I don’t think this is sustainable, so in the next few years we might see a bit of a bubble bursting.

And a bit of advice to all the new indie devs out there - be wary of people calling themselves 'publishers'. Signing a publishing deal doesn’t guarantee you success. Nice little tip to see if a publisher is good at what they do – go to SteamSpy, search a game they worked on, bring up the game’s profile, and then click on the publisher link. That will give you a list of all the games the publisher worked on and an idea of what numbers they can generate when it comes to sales/marketing/etc. You will see if they are a one-hit wonder, a beacon of success, or a wtf. Remember, you will pay them a portion of your profits, and with only a few thousand of sales, that ain’t that much profit to share, hence the bubble theory from above.

How did you choose your company name?
The reason why I chose those numbers is that, usually, marketing agencies call themselves some pointless waffle like 'Cloud Beams' or 'Red Spaghetti', that sort of thing. Or, the owner just goes all dictator like and calls his agency by his surname. I choose numbers because no matter where you are from, you will never mispronounce a number, hopefully the name sticks, and lastly, I was 32 when I decided to start my own agency and 33 when I did it. It will be easy to remember when my Alzheimer eventually kicks in.

What do you think are the most exciting market trends in games right now?
That there are still game developers that try to do something different and original with their games. I know that it’s easy to complain and mention the constant loot boxes/battle royales/whatever worked, let’s copy that attitude. But you know what? Under all that cynicism, there are still original titles being made that try to push the envelope of gaming. So if you are one of those people, get in touch.

The other trend is blockchain. And I apologise for saying that buzzword, but you know what, this thing has huge potential. And not just in terms of “how much money I can make on the crypto market”, but more about how blockchains give digital goods real value. It’s pretty exciting stuff and opens a lot of new opportunities for game developers - re-sellable items, artbooks and so on.

What are your aims for the coming year?
To do good work for my clients. That’s all I want to do, as that’s what gives me buzz and meaning. From there, you never know what might happen next.