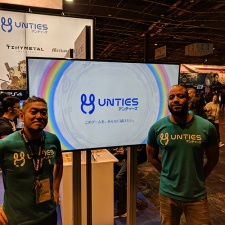 Last month, the announcement that Sony Music was launching an indie games label Unties left many people in the industry a bit confused.

The publisher is bringing games to PC, as well as PlayStation 4 and Nintendo Switch, but seemingly has nothing to do with PlayStation. We caught up with one of the people behind it, Grasshopper Manufacture, Q Games and Indie Megabooth vet John Davis (pictured, far right) on the Paris Games Week show floor to find out more.

So, in a nutshell, what is Unties?

Unties is a label that's been started by Sony Music Entertainment. The idea is that we want to release indie games on all platforms. Some of the people that used to work for Sony Interactive Entertainment moved over to Sony Music in order to do this so they could be a bit more free. You have indies, both in the Japan and the West, who want to release a game, they don't want to be tied to one platform, they want to get the game to as many people as possible. So our idea was to support them as much as possible and try to have a label that was about bringing games to the masses, but also having the kind of support that Sony can provide.

Could you tell us a bit about where the name came from?

Unties means untying yourself from one thing and being able to reach a larger market.The Japanese pronunciation is 'an-tees'. It sounds like indies, a little bit like anti… as well as undie. I remember going to Sony saying that there's going to be a lot of Western people who will think of this like underwear, like undies. They thought it was funny and cool. They liked it.

It’s a bit strange that Sony is launching a games label and PlayStation isn’t involved in any way.

It was a big surprise for everyone. Given that Sony Music has a reputation of doing publishing for a lot of different things, like anime, music and books, having a games division to do unique projects and interesting games on as many platforms as possible gives the developers a little bit more marketing muscle and a bit more support beyond the PlayStation brand.

There are a great number of indie publishers in the market right now. What sets you apart from the others?

We have good connections with the press; we have many years experience. My partner Akiranaru Ito used to work at SIE, and my other partner in Japan right now Masaya Ito, are both pretty deep in the Japanese indie scene. They have been working in Japanese games for so long.. if you want to bring a game to Japan, it's about having the connections and being able to show the press, and talk to the right people in the press, and get them some attention. Japan is still very much a traditional market; you need to be in Famitsu, you need to be in those major outlets if you are going to catch traction with the media or with the players.

We have a really good base with streamers as well in Japan. If you're a Western indie and you want to publish your game in Japan, then they have a lot of expertise. I've been working for the Indie Megabooth, for Q Games and for Grasshopper Manufacture doing Western PR for about seven years now, so I have the connections on the Western side. It's about who you know in this business. I feel we have a really good network that we work with as well as the backend of Sony Music. We have the marketing and the promotional budgets to be able to let those games shine.

What kind of projects are you looking to partner up on?

It's a wide variety of things, but any game that catches our interest we want to try and bring it out and let the world see it. Digital publishing is so easy now. You can be an indie developer and have a great game and publish it yourself on Steam, GOG or Humble or whatnot, but there are so many games being published that it's very hard to set yourself apart. We feel that we have the connections in the West and the East through the press, and we have the marketing muscle to really let those unique games shine and give them some space in a very crowded market.

Publishing on PC is notoriously difficult right now, largely due to the sheer number of projects launching. What are the biggest challenges you foresee releasing games in this space?

Discoverability is the main issue. For any publisher and developer, the biggest problem is that there are tonnes of games being released every day. How do you find the right people to buy and play your games? That's a challenge that everyone has to work with. There's no 'one size fits all' solution; it requires that you be engaged with the community and the developer. Give the community access to the developer, show them why it's important and have a good relationship with Steam or any of the publishing platforms so they understand this game is special and why they should be showcasing it on their store. It's a combination of things. The challenge is not easily surmounted or overcome; you can't just throw money at it either. Having money is nice, but it's not the only thing.

I want to help these games. Last Standard and Merkava Avalanche are still in pretty early stages. We hope to support those folks and help them finish the games successfully. Tiny Metal is coming out on Switch on November 21st. We're looking to have a big launch with that. I want to help developers reach the audience that they want to get to. There are so many niche places now. You don't have to sell 1m copies of a game to everyone. You really get into finding your exact audience; that might be 50,000 people, that might be 100,000 people.

So, these are games with low budgets, but ones you have reasonable expectations about.

It's not triple-A; you don't need to sell 1m copies to make something profitable. We want to reach people who are passionate about the games and are going to tell their friends about it and evangelise and help to spread the word and say it's really cool. Down the line, I hope that we can continue to really interesting indies and help them continue to make great games.