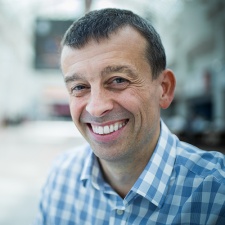 How would you say the last year has been for Intel’s games business?

Games are an increasingly important part of business and it’s an area that, actually, we find very energising and exciting. We have seen really big growth in the gaming CPU market. Overall, the sector's growing by double-digits. In terms of volume we're seeing growth of over 15 per cent year-on-year.

Recently Intel has become involved in esports, even sponsoring big tournaments. Why is that?

Esports is an amazing phenomenon. There are in the order of 385m people worldwide who are spectating and watching live streaming, it's a massive number of people. And that seems to be growing enormously, so, for us, esports is becoming a whole category in and of itself. Clearly, in order to participate and play in esports, you need great technology, which we have, so we're responding and supporting the esports industry directly. But not only that, this 385m people not only love watching esports, they also play games on their computers. Helping these people understand how they can have the very best experience with Intel technology, we see as a great opportunity to fulfil their desires whilst, obviously, growing business for ourselves and the rest of the industry.

So it's more of like a marketing interest than anything else?

Well, yeah. I mean, but also, the gamers out there, these are really demanding people, so we learn a lot from what they want. We're not just trying to sell them the hardware we're developing, what we're trying to do is to understand what they need, and continue to evolve the gaming platform around that.

In August you launched your new Coffee Lake-R CPUs, and just recently you released the Coffee Lake-S line. What has the response been like so far? And what were your expectations prior to launch?

We have been very excited.  [Across both R and S], we said we were expecting up to 40 per cent improvement, and that was on all of our internal web stats. We were expecting big things because, this is the biggest generation-on-generation performance improvement in over a decade. It's enormous and kind of, pretty much unprecedented. In the first half of next year, you will see us launching the Coffee Lake-H product, which is gonna bring its eighth generation gaming capability to high-end notebooks.

So, our expectations... internally we felt very positive for that, and we've felt that we're really responding to the needs and the demands of our customers, the end users out there. But the feedback from the industry has been phenomenal.

The common consensus is that Intel is the leading name in the CPU market. Recently, AMD has been getting some great press for its Ryzen chips. How do you feel about this competition in the market? In my opinion, competition is good for everyone.

Well, you'll have to talk to those guys about their product. Our focus is on continuing to innovate our technology and being the very best out there and you can see that with the eighth generation, I just mentioned that we've got this biggest generation-on-generation step up in a decade, that's what we've done with eighth generation to bring that. We believe that we've got leadership technology, and the evidence seems to suggest we've got leadership technology, and we want to continue to lead and innovate. Our commitment to Moore's Law, our commitment to innovation is undiminished, and we're passionate about continuing to reinvent technology and delivering the best solutions for consuming in the market, whether they're, by the way, whether they're gamers or whether they're anybody else, for that matter. So innovation is in our DNA, and what I described to you earlier on is not only are we innovating in terms of the CPU platform, the CPU design itself, we're innovating in our manufacturing process, we're innovating in our technology, what goes into the silicone. And we own that whole lifecycle, we're going to innovate across the whole stage of CPU, and manufacturing and the technology that goes into the silicone itself; [to] deliver the best solutions. And I've mentioned, actually, a minute ago, our direction is we wanna continue to bring new innovations every year into the consumer place.

Since the Brexit vote last year, there's been a lot of fluctuations with the pound versus other currencies. One of the sectors that has been hardest-hit by that appears to be tech. Have you seen that impact at your end?

Brexit has been disruptive. We’ve seen a couple of factors that have played out over the last year. We've seen the pound fall, particularly against the dollar, and most of the components are traded in dollars; Intel trades in dollars. So the pound has fallen and that's made components more expensive. We trade our business in dollars, and we price our products in dollars, so our customers are impacted by that. The whole industry, to a degree, trades in dollars as well.

The other thing we have seen is, particularly across the computing industry, there have been supply constraints on memory and on memory technology and on panels technology, which has raised prices on that. So the overall bill of materials going into PCs has gone up because of that. This instability in the exchange rate is what causes the most problems. When people don't have a predictable exchange rate, or a stable exchange rate then that's very disruptive. I work with retail, and that sector has seen prices going up and going down, it's very difficult to know buying conditions of products, because they may buy a product today that it cheaper tomorrow, because of the exchange rate. When the exchange rate is stable, it's a little bit more stable now, it gives more confidence back in the market; and, by the way, we saw such similar situations in Russia and Turkey and other countries where the exchange rate varied wildly, but once it's stabilised, the market starts to adjust to that new level. We work with the industry and with retailers, we have a whole range of products that go up the price-band. But bear in mind that the overall price of a computer that a consumer buys is not just the function of the CPU, it's the function of all of the components, the vast majority of which are priced in dollars, meaning that, yes, in the UK prices have gone up, 10 to 20 per cent in some cases, as a consequence of that.

Brexit's been quite disruptive, because of that, I look forward to us kind of getting through it and sort of back into stability of the market.

Additional reporting by Louis Gaffney Lafon. We also spoke to Shakespeare about VR and esports - you can read more about that over at The Virtual Repor