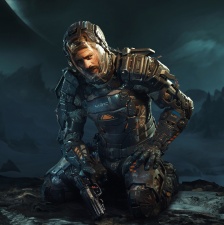 New horror title The Callisto Protocol has debuted in the Steam Top Ten taking both fourth and fifth places.

The Day One version of Striking Distance's sci-fi thriller took the No.4 spot, while the base version of the game takes fifth. The Callisto Protocol has launched to overall positive reviews largely due to the fact it is a spiritual successor to the Dead Space franchise and was developed by some of the same key people. Its popularity is sure to be good news to Electronic Arts, whose remake of the original Dead Space is set to launch next year.

Top place once again goes to Steam Deck, though this is the first time in a while it isn't the only Valve hardware in the charts. The company's Index VR Kit makes a return to the Top Ten in ninth place, though there's been no cut in price.

FatShark's team shooter Warhammer: 40,000 Darktide shoots to second place following its November 30th release. That comes in the wake of pre-orders for the title charting at No.4 last week. Call of Duty: Modern Warfare 2 holds steady in third place – with the Vault Edition coming in tenth – while Red Dead Redemption 2 drops from third to sixth week-on-week as the price returns to normal. Cyberpunk 2077 falls to seventh place for the same reason, while Need for Speed Unbound Palace Edition makes its debut at No.8.

Here is the Steam Top Ten for the week ending December 4th: