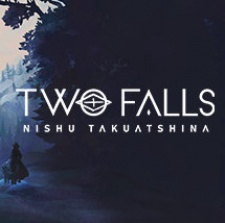 After more than two years, the Big Indie Pitch was recently back on the road, this time heading to Toronto for the first time ever as we hosted Pocket Gamer Connects Toronto 2022. Of course, this also meant the arrival of The Very Big Indie Pitch.

The Very Big Indie Pitch is our bumper edition competition where even more developers are able to pitch an ever-increasing range of brand new and diverse gaming experiences from some of the most exciting indie developers, not only from across the globe.

As always, the developers gave it everything they had in order to walk away as the winner. An award that was eventually bestowed upon Unreliable Narrators' Two Falls (Nishu Takuatshina). Though it is certainly worth highlighting how well received our eventual runner-up and former winner HOCKEY HEROES was alongside our honourable mention No More Flat Days, all of which you can learn more about below.

In this narrative-driven adventure, players will are placed into the shoes of Jeanna, a girl from the French colonies who now finds herself stranded, and Maikan an Innu travelling west to escape a strange illness that has afflicted his people. Through their intertwining journeys, players will explore the wilderness of 17th-Century Canada whilst making choices along the way that will have profound consequences for both of these travellers.

From stunning visuals, to a deep and meaningful story, all the way to see the impact of the choices you make along the way, it's easy to see why this coming-of-age story came out on top in our first every Toronto Big Indie Pitch.

Hockey Heroes is a 3v3 arcade-inspired hockey RPG involving fast-paced gameplay, heavy hits, and of course, brutal over-the-top fights. Being an RPG, it's not just 90s-inspired arcade action on offer, as developer Treewood Studios has also added a range of deep RPG systems such as player customization, character classes, equipment unlocks, and stat upgrades. There's even a full story on offer too.

As such, players can look forward to hopefully taking their very own team of Hocket Heroes from the local frozen lake, all the way to the Championship match.

No More Flat Days is an action-adventure game in which players must uncover the secrets of a recurring natural disaster. To do so players will step into the shoes of a young fisherman who must journey across the oceans in order to learn more about the impending disaster, and hopefully prevent impending disaster. The catch? Even though you begin on Monday with nothing, however, if the curse hasn't been broken by Sunday then the cycle of disaster will continue eternally.