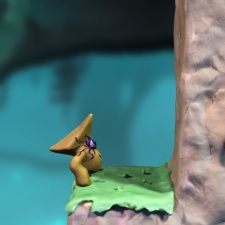 After more than two years, the Big Indie Pitch was recently back on the road, this time returning to Seattle for the first time since 2019 as we hosted Pocket Gamer Connects Seattle 2022. Of course, this also meant the return of The Very Big Indie Pitch.

The Very Big Indie Pitch is our bumper edition competition where even more developers are able to pitch an ever-increasing range of brand new and diverse gaming experiences from some of the most exciting indie developers, not only from across the globe.

As always, the developers gave it their all in order to walk away as the winner. An award that was eventually bestowed upon Hat Hair Games' Reclamation. Though, it is certainly worth highlighting how close it was between Reclamation and our eventual runner-up Slime Heroes, both of which you can learn more about below.

Reclamation is a charming 2.5D Metroidvania platformer that has been entirely sculpted out of real clay. You may be wondering how this works? Well as described by the developer, once created the "assets are sculpted and 3D scanned using efficient, state of the art photogrammetry techniques". Through this Hat Hair Games aim to create a truly unique visual experience.

Of course, though, it's not just about appearances, and you'll be happy to hear that the judges felt that the rest of the game stands out just as much as the presentation. For example, as you explore a sprawling, interconnected world on a mission to restore the great beast Oogrim to its former glory, players will be able to possess enemies in order to access new areas, defeat challenging enemies, and complete your quest. Be careful though as possessing a new body requires giving up your old one, so players will have to choose wisely.

Have you ever noticed how the slimes are never in the leading role? In fact, they're often the opening enemies. Well, in this game, as you might have already guessed, the slimes are finally the heroes. All in all, Slime Heroes is an adorable and cute action RPG in which players must venture forth into a mysterious world filled with magical plants and wondrous creatures.

Through exploring, players will be able to discover long-forgotten treasures, take on corrupted enemies, and collect a variety of valuable gems. That last bit is quite important too, as these gems aren't just lovely to look at, but can be combined by the player in order to create thousands of unique magical abilities that offer a range of enhancements and combat powers. Finally, Slime Heroes offers the ability to set off on the quest together alongside your friends in order to make the adventure even more enjoyable than it already was.

Rocket Adrift discuss putting empathy, compassion, and community and the forefront of creation