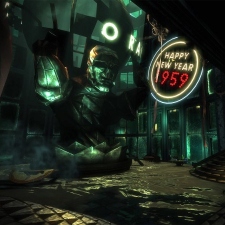 Take-Two is making a film adaptation of BioShock for Netflix.

The project is being produced by Vertigo Entertainment, who is also working on a Minecraft movie, in conjunction between Take-Two's 2K Games arm.

This isn't the first time that the company has tried to make a BioShock film; back in 2008, the company partnered with Pirates of the Caribbean director Gore Verbinski for a movie project which fell apart.

“Netflix is among the best and most forward-thinking storytellers in all of entertainment today," Take-Two CEO and chair Strauss Zelnick said.

“We are thrilled that they share our vision and commitment to the BioShock franchise, which is beloved by millions of fans around the world. 2K’s Cloud Chamber studio is deep in active development on the next iteration of the series, and coupled with our partnership with Netflix, we remain highly confident that BioShock will continue to captivate and engage audiences like never before.”

The BioShock series started back in 2007, with a sequel launching two years later. The last entry in the franchise – Infinite – was released in 2013. The man behind the franchise, Ken Levine, is currently working on another project, though this seems to be in trouble.

Meanwhile, Take-Two set up a new studio called Cloud Chamber to work on another entry in the BioShock franchise.