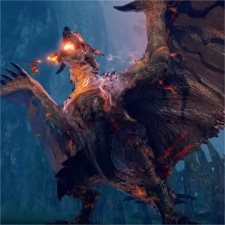 The Japanese publishing giant revealed the figure on its investor portal, saying that this was sales across both Nintendo Switch and PC. The former launched in March 2021, while the latter was released earlier this month.

Furthermore, Capcom has said that the Monster Hunter franchise as a whole has sold 78 million copies as of September 31st, 2021.

Monster Hunter Rise was the second highest-selling title on Steam last week following its release, while pre-orders for the title were the third best seller the previous week.

"Monster Hunter Rise was released for Steam, a PC platform with a broad global user base, on January 13, 2022," Capcom wrote. "Featuring high-resolution 4K support and voice chat functionality for PC, the game provided a fresh hunting experience that garnered praise from players while additionally growing the player base across a wide range of countries and regions. This, combined with sales of the Nintendo Switch version that was released in March 2021, drove global shipments of the game to surpass 8 million units.

"Going forward Capcom looks to further expand its player base with Monster Hunter Rise: Sunbreak, a massive premium expansion for this title that is slated for release in summer of 2022.

"Capcom remains firmly committed to satisfying the expectations of all users by leveraging its industry-leading game development capabilities."

Capcom has said that it wants to make PC its main platform for video games.