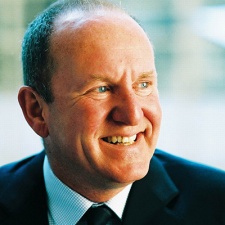 UK games industry icon Ian Livingstone is to be knighted as part of the New Years Honours list.

The Games Workshop co-founder – and current co-founder of investor Hiro Capital – is being made a Knight Bachelor this year. This follows him being given an OBE back in 2006 and a CBE in 2013.

Livingstone has been involved with the British games scene for a long time now, co-founding tabletop firm Games Workshop back in 1975 with Steve Jackson and John Peake. He went on to create the Fighting Fantasy series of game books with Jackson, which made its debut in 1982 with The Warlock of Firetop Mountain.

From there he wrote 1984's Eureka for British games firm Domark before investing in the company in 1993. That outfit was later bought by Eidos, with Livingstone being involved in the creation of the now-iconic Tomb Raider franchise. More recently he played a huge role in bringing coding onto the UK curriculum following the Next-Gen Skills Review.

"I am delighted and very proud to have been awarded a Knighthood," Livingstone said, speaking to GamesIndustry.biz.

"It is fantastic recognition for the games industry and the brilliant people who are part of it. I have enjoyed every minute of my 47 years in the industry, and long may it continue."

Livingstone isn't the only member of the games industry to be named on the New Years Honours list. Dr Mick Donegan of charity SpecialEffect has been awarded an MBE, while UK Games Talent and Finance founder Paul Durrant has been made an OBE.