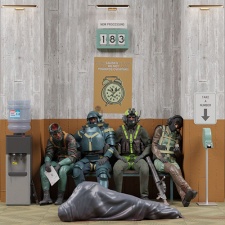 In a post on the developer's website, Control franchise director Mikael Kasurinen said that this new project was codenamed Condor and appears to be a four-player title, going by the artwork that is shared in the blog post.

Remedy is teaming up with Digital Bros' 505 Games arm to publish this title. That's the same company that published the original Control back in 2019.

"We get that there is going to be skepticism about multiplayer," Kasurinen wrote.

"But I believe we can create shared experiences without compromising the unique DNA of who we are, or the stories we want to tell. Yes, we need to re-think our angles, our techniques, our mindset, but we see it as an exciting challenge: What would a Remedy multiplayer game look like?

"The Vanguard team has done awesome progress on that front already, and the possibilities there are extremely exciting. Both games will be different examples of how you can collectively experience our worlds.

"We are approaching this with a mix of excitement and respect. We want to create something that is engaging, yet familiar, something any of our fans can jump into and feel at home in. Together."

Control has sold more than two million copies since its launch in August 2019.

Condor is one of six projects that Remedy has in the works at the moment; the firm has partnered with Epic Games on two titles and has its free-to-play co-op project, Vanguard. That's on top of the work the company is doing for CrossFire X and CrossFire HD for Korean games giant Smilegate.

In May of this year, Remedy attracted investment from Chinese tech and entertainment giant Tencent.