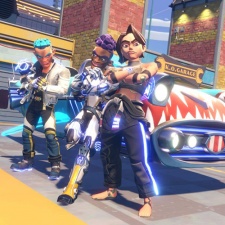 That's according to publisher Electronic Arts, which revealed the milestone on June 3rd, almost two weeks after the game's May 21st release date. Within Knockout City's first five days, it was played by more than two people.

Initially, the game was meant to be free-to-play until May 31st. However, EA has now extended the free period, meaning that Knockout City is free to try out until players reach Street Rank 25.

"This party was unforgettable in many ways, and we’re so excited to see the support and positivity pouring in from you, our community! Since launch, we’ve seen 5 million new brawlers join us in matches, there’s been amazing— and unexpected— gameplay, hundreds of thousands of Crews were formed, over half a billion KOs landed, millions of hours of gameplay were watched, and—dare we say it?—thousands of friendships were made along the way. Who knew you could bond over hitting one another in the face with a dodgeball?"

Knockout City was revealed in February and is being developed by Velan Studios. Back in 2019, it was revealed that this studio – founded by veterans of Activision's Vicarious Visions – had partnered with EA for a new title.