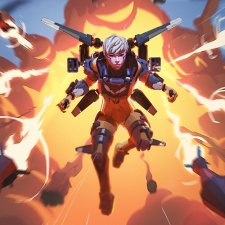 According to Steam Charts, the title boasted 291,361 concurrent users yesterday (Wednesday, May 5th) due to the launch of its ninth season of content. That's considerably higher than when the comms director of developer Respawn – Ryan Rigney – took to Twitter to reveal that Apex Legends had hit a record for concurrent players earlier that day, when the game had 241,882 people.

This huge interest in Apex Legends is due to the launch of Season Nine, Legacy, which not only sees the introduction of a brand new character in Valykrie (pictured), but also brings in the new Arena game modes.

Apex Legends has seen some considerable growth since coming to Steam. In February, the game boasted 198,235 simultaneous users, while the previous month Apex Legends was clocking in around 129,928 players.

The recent popularity of Apex Legends has come with some downsides, not least the fact that the game's servers have been struggling to handle the volume of users and have been down or unstable since Legacy's release.

The battle royale title debuted on Steam in November following its launch in February 2019. Since it was first released, Apex Legends has attracted more than 100 million users. The game hit 70 million users in October 2019, meaning it took the battle royale hit another 18 months to bring in 30 million players.