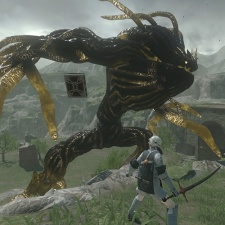 Square Enix's remake of 2010's Nier has shot straight to the top of the charts on Steam.

Nier Replicant ver.1.22474487139 launched on April 23rd and is a touched-up version of the original game. No doubt these strong sales have been helped by the blockbuster release of 2017's Nier Automata, which has sold more than 5.5 million copies to date.

Second place goes to It Takes Two from EA Originals, which was No.1 last week, while Valve's Index VR headset holds steady as the third highest-selling game of the week.

Titanfall 2 charts at No.5 thanks to a 75 per cent price cut in the EA publisher sale, which is also the reason why Battlefield V appears in sixth place as the result of a 67 per cent reduction in price.

Endnight's The Forest rises one place week-on-week to No.7, while Valheim drops from sixth to eighth. The Operation: Broken Fang DLC for Valve's own Counter-Strike: Global Offensive returns to the Top Ten in ninth place, while new shooter IP Outriders falls five places week-on-week to No.10.

Here is the Steam Top Ten for the week ending April 24th: