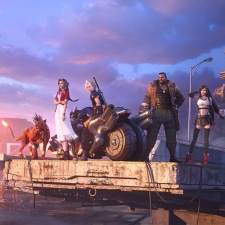 The Intergrade edition of the iconic RPG initially made its PC debut on the Epic Games Store in December 2021 following its initial release on PlayStation 4 back in April 2020. This new iteration of the Remake comes with the new Intermission story content chapter as well as a wealth of cosmetic content.

First place once again goes to Valve's Steam Deck, while the company's Index virtual reality headset has dropped out of the Top Ten for the first time in a while. Tripwire's Chivalry 2 makes its Steam debut in third place following its June 12th release, in part thanks to a 40 per cent price cut.

Monster Hunter Rise from Capcom returns to the Top Ten in fourth due to a 49 per cent price cut, while pre-orders for the game's upcoming Sunbreak DLC took sixth place ahead of its June 30th launch.

Elden Ring continues its descent down the charts, falling three places to seventh week-on-week. Vampire survival title V Rising also drops down the charts by six positions to reach No.8. 2K's The Quarry takes No.9 this week, dropping one place, while the newly-released Starship Troopers: Terran Command rounds off the Top Ten.

Here is the Steam Top Ten for the week ending June 18th: