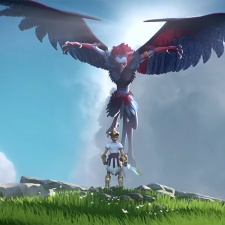 That's according to United States Patent and Trademark Office filings – as spotted by Tech Raptor – which showed that the drinks firm filed an opposition to Ubisoft's trademark submissions, saying that it would cause damage to its business in the games industry. Monster sponsors esports events and team.

When a trademark is filed, there's an opposition period where other companies can dispute the filing, normally because it is too similar to their own brands. You may remember that Slightly Mad Studios had issues with this when it was trying to secure the trademark for its MadBox games console.

In May of this year, Ubisoft denied Monster's allegations in its opposition notice and requested that it dismiss this resistance with prejudice. The following month, there were hints that Ubisoft had renamed the project when the company referred to it as "the game formerly known as Gods & Monsters" when responding to the fact that a build had been accidentally uploaded to Google's Stadia streaming platform.

In early September, Ubisoft rebranded the title to Immortals Fenyx Rising following a trademark filing at the end of August. At the time of writing, no-one has opposed the brand.

It's likely that Ubisoft could have fought its corner against Monster, but this could have been very expensive. Plus, the French publisher wants to launch the game on December 3rd, leaving little time to resolve this legal drama.

Despite Ubisoft having seemingly abandoned the Gods & Monsters trademark, Monster Energy has filed several requests to extend the opposition period.